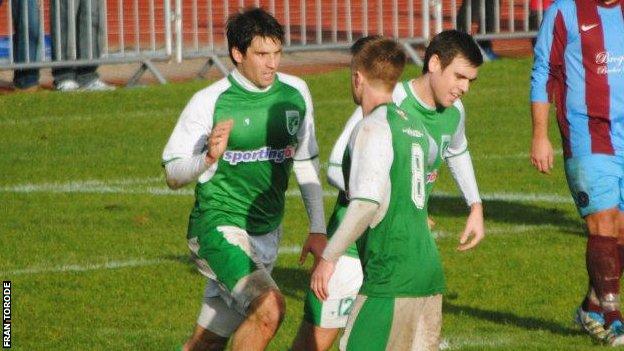 Top scorer Ross Allen hit a hat-trick as Guernsey FC progressed to the last 32 of the FA Vase with a 4-0 win over Erith and Belvedere at Footes Lane.

Allen, who has now scored 27 times this season, opened the scoring as he chested home a ninth-minute pass from team-mate Dave Rihoy.

Allen got his second on 24 minutes and Rihoy made it 3-0 before half-time.

Despite a barrage of pressure from the visitors, Guernsey stood firm and Allen completed his hat-trick on 54 minutes.

Guernsey will now travel to either fellow Combined Counties League Premier side South Park or Sussex-based Rye United in the last 32 of the FA Vase.

South Park are six points behind Guernsey and made the final qualifying round of the FA Cup before being beaten by Metropolitan Police.

"It was a really good, solid win and getting the clean sheet more than anything will really please the boss," Allen told BBC Guernsey.

"It's a different atmosphere and it's a game that both teams were really going out to try and win.

"It's the kind of game that you love playing because if you go a goal down you can't give up the game, you've got to go for it because there's nothing to lose."

Guernsey boss Tony Vance says fans who think the island side can win the whole tournament need to be realistic.

"It's one game at a time, everyone's; going to start getting excited, but it's just important that we keep trying to do what we want to do and everyone stays focused and realistic.

"There are some big sides in the competition and whilst the draw hasn't been that kind to us, we've got to be realistic.

"It's the business end now, it is the FA Vase and the prize in Wembley.

"That's beyond our dreams, we're just pleased that we've go another victory."