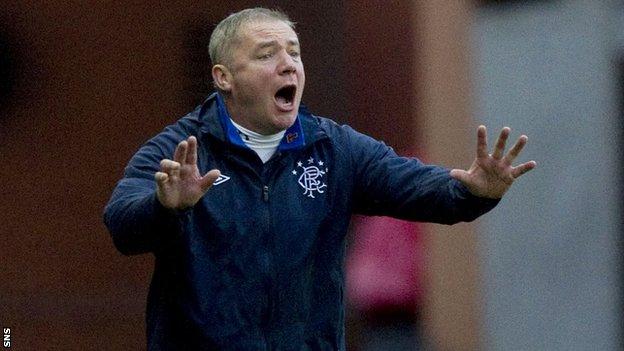 Rangers manager Ally McCoist has backed the club's stance not to accept tickets for their Scottish Cup tie at Dundee United in February.

Fans groups had called for a boycott of the match and

"We all want to move on but, at the same time, I can understand the stance taken by the supporters," said McCoist.

Some Rangers fans have pinpointed Dundee United chairman Stephen Thompson as being one of the most vociferous opponents of the relaunched Ibrox club being admitted to the Scottish Premier League in the summer.

And their anger stems too from Thompson's refusal to honour Rangers fans' ticket stubs for a rearranged game after a match at Tannadice in November 2009 had been abandoned at half-time because of a waterlogged pitch.

With ticket proceeds for Scottish Cup matches split evenly between both clubs after the hosts' costs have been deducted,

"I've spoken to a couple of the heads of our supporters groups for the opinion of their members and they have told me overwhelmingly that the vast majority - nearly unanimous - didn't want to take tickets for the game," said McCoist, whose side were placed in Division Three for this season.

"It's not an ideal situation that we won't have any Rangers fans in the stadium but the club have taken this stance and it's one that I fully support as well.

"When we were voted out of the league, a lot of the chairmen and club representatives told us that they were listening to their fans, which is totally understandable and acceptable.

"With this stance, we've decided to do the same."

United manager Peter Houston played down the impact of the situation.

"It's all about trying to win against a good Rangers side who have got international players.