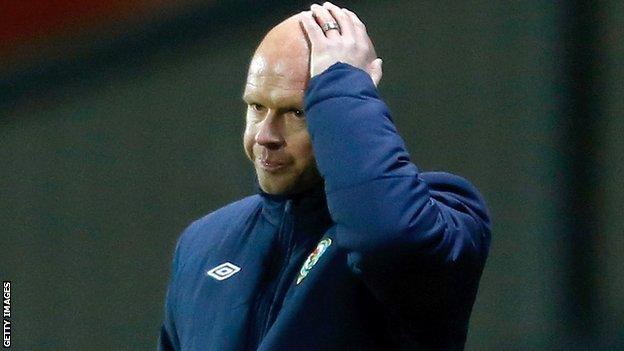 Thomas, who joined from Bournemouth, headed the Seasiders ahead from Nathan Delfouneso's cross before Kirk Broadfoot sealed the points.

Broadfoot latched on to a right-foot delivery by Tiago Gomes to continue Blackburn's poor run.

Rovers, who have won once under Berg, hit the post through Simon Vukcevic.

Michael Appleton remains unbeaten in seven games since taking charge of Blackpool in November, but Berg is struggling to inspire Rovers.

Their next two games are at home to Brighton and away to Middlesbrough - two clubs targeting promotion.

And former Manchester United defender Berg knows he must engineer a quick change in fortunes if Blackburn are to halt their slide down the table.

In trying to improve their form, the Norwegian dropped former England goalkeeper Paul Robinson in favour of 21-year-old Jake Kean.

And Rovers began well enough, creating plenty of chances in the first half.

But they found themselves trailing at the interval after Thomas scored against the run of play with a glancing header following Delfouneso's cross from the left midway through the first half.

Vukcevic rattled the post with a shot on the turn but Broadfoot made sure of the points nine minutes from time.

The former Rangers player, who moved to Bloomfield Road in September, picked the perfect moment to score his first goal for the club after being picked out by Gomes.

Blackburn defender Scott Dann almost added to Rovers' misery when he headed against his own post in stoppage time.

"A few people got frustrated when we were drawing some games but now we are progressing nicely although I imagine there will be some comings and goings in the January window.

"It was a good time to play Blackburn here but they will kick on again at some point because they have the talent.

"I feel for Henning Berg as I would for any manager under pressure.

"It takes time to bring your own ideas into a club and bring in a nucleus of players that you believe in."

"We were desperate to win and play well and I think we showed that in the opening half.

"I don't know how much the players heard of what was being shouted at them by the fans but I don't think too much about my own position.

"All our players tried their best but when you are lacking in confidence you become indecisive.

"I am focussed on doing the best I can to improve the team but if our early chances had gone in it could have been a different game."