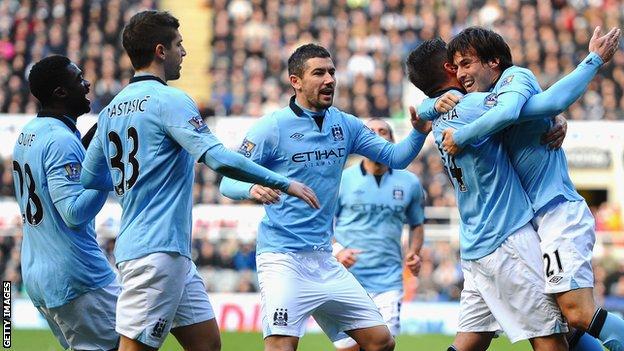 Manchester City bounced back from the disappointment of losing the Manchester derby with a stylish victory over Newcastle United at St James' Park.

Sergio Aguero opened the scoring with a close-range finish after being set up by Samir Nasri, who hit the post 10 minutes later.

Javi Garcia made it 2-0 from David Silva's corner before Demba Ba's header after the break gave the Magpies hope.

It was the perfect response from Roberto Mancini's side after the bitter disappointment of losing 3-2 at home to neighbours Manchester United last Sunday.

Mancini responded to the defeat against United by making three changes - Mario Balotelli failing to even make the substitutes bench as the City manager opted to play Carlos Tevez alongside Argentine compatriot Aguero for the first time since the 5-0 win over Aston Villa on 17 November.

This was just the response Roberto Mancini wanted from his side following their recent Champions League exit and Manchester derby defeat. Newcastle had their moments but City produced a classy performance as they answered the doubters. For Newcastle, it is six defeats in seven league games and they need to return to winning ways quickly

And the change immediately paid off as Aguero side-footed his side into a 10th minute lead in front of a gaping net after Yaya Toure's defence-splitting pass allowed Nasri to tee up the City striker for his sixth Premier League goal of the season.

There was also a place in the side for Kolo Toure but it was the performance of younger brother Yaya that really caught the eye.

Yaya produced a colossal performance, the Ivory Coast international leading by example as stand-in captain in the absence of Vincent Kompany, who was nursing a groin injury.

City were dynamic going forward, the only negative for Mancini before half-time being the loss of Nasri to a groin injury.

The sight of Nasri, who hit the post from inside the six-yard area in the 20th minute, vanishing down the tunnel in the 37th minute was a welcome one for Newcastle, who failed to deal with the Frenchman's pace while Tevez and Aguero were also allowed to roam at will.

Aguero had a shot cleared off the line by Mike Williamson, while Tevez was denied by Magpies' keeper Tim Krul. Garcia then doubled the lead six minutes before half-time with a header from Silva's corner which Davide Santon should have cleared off the line.

Six minutes into the second half Demba Ba gave the hosts hope when he headed beyond Joe Hart, who was standing well off his line, after Fabricio Coloccini hooked the ball into the area but City capped a classy performance through man of the match Yaya Toure.

He slid home from seven yards after Silva had fed Zabaleta on the left side of the penalty area and the full-back pulled the ball back for Yaya Toure.