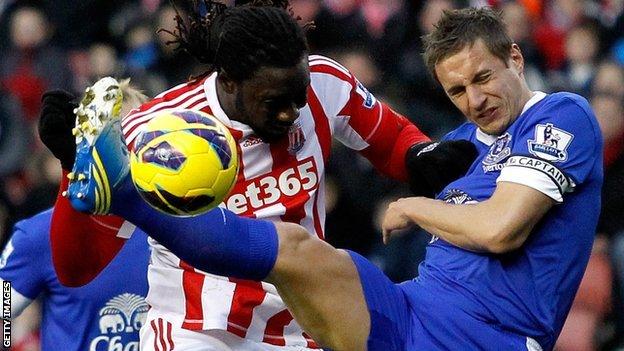 Potters captain Ryan Shawcross headed Steven Pienaar's cross into his own net to give Everton a first-half lead.

Leon Osman had a chance to make it 2-0 but shot wide before Jones headed in an equaliser from Shawcross's angled pass.

Everton could have been reduced to 10 men when Marouane Fellaini headbutted Shawcross but the incident was missed.

However, Fellaini could still face disciplinary action with Everton manager David Moyes later admitting he expected the Belgian international to be banned.

Everton made a bright start as Darron Gibson threaded a ball to the overlapping Seamus Coleman, whose pull-back found Nikica Jelavic, but the striker's effort was blocked by Shawcross.

The visitors then had a penalty appeal turned down as Pienaar's shot hit Glenn Whelan's arm, but referee Mark Halsey was not interested.

Stoke's Matthew Etherington dragged an effort wide of the post and Jones shot wildly over the crossbar from 25 yards.

The Potters' best chance of the first half came after Etherington's deep corner was headed back across goal by Jon Walters, but Steven Nzonzi's weak header from only five yards out was straight at Tim Howard.

Everton nearly made their hosts pay as Gibson's intelligent pass over the top found Steven Naismith. The Scot lifted the ball over the onrushing Asmir Begovic but Shawcross cleared it off the line.

Stoke's next chance came when Etherington, who swapped wings with Walters, put in an excellent cross from the right wing, which Howard, playing in his 200th consecutive Premier League game, had to punch away.

But Everton took the lead when Pienaar's cross was headed into his own net by Shawcross, only the third goal Stoke had conceded at home in the league in 2012-13.

The Potters, who have kept eight clean sheets this season and have the best defensive record in the league, should have fallen 2-0 behind.

Leighton Baines pulled the ball back to an unmarked Osman but the England midfielder dragged his effort wide from 12 yards.

That miss proved costly for the Toffees as Stoke equalised seven minutes into the second half through Jones, who outjumped Phil Jagielka to head in from Shawcross's diagonal ball in from the halfway line.

Jones, who had not scored in the Premier League since August 2011, nearly grabbed his second in five minutes when he collected Glenn Whelan's pass, held off a challenge from Baines and hit the post from a tight angle.

As the game wore on, Stoke had the best chances to grab a winner. Cameron Jerome burst through but was denied by Howard and substitute Peter Crouch was unable to convert the rebound, Sylvain Distin intervening to clear.

The final whistle ensured Everton's eighth draw in 11 matches, a result that leaves the Toffees fourth, while Stoke remain ninth.

"We dug in and got a hard-fought point.

"Stoke are a good team, they make it difficult and anyone who comes here will find it difficult but we had a wonderful chance to make it 2-0.

"Leon Osman missed a great chance, we should have stopped their goal and we were a bit fortunate that Stoke did not get the winner."

"The first half was very even but they got the goal off the top of Ryan's head. They had a great chance to kill the game and if they had scored then it would've been a different match.

"We were let off and I told the lads at half-time to go and give it a blast in the second half and we had four other great opportunities to score a second.

"We've had chances in all of our games but we need to put the ball into the net more."