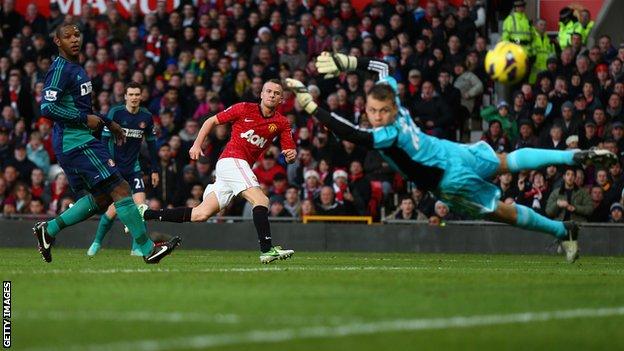 Manchester United produced a ruthless attacking display at Old Trafford to ensure they will top the Premier League table this Christmas.

Two goals in four first-half minutes ultimately decided this as a contest, with Robin van Persie and Tom Cleverley firing in to put Sir Alex Ferguson's side firmly in control.

Wayne Rooney tapped in from close range to make it 3-0 just before the hour mark but Sunderland kept fighting and deservedly pulled a goal back through substitute and former United striker Fraizer Campbell.

Having seen the title go to the club which has topped the table at Christmas in each of the past three seasons, this display will no doubt add to their growing belief.

The Sunderland manager may retain the firm backing of the club's decision-makers but only three victories from their last 25 league matches brings its own pressures, especially considering the fact that three of their next four games are against Manchester City, Tottenham Hotspur and Liverpool.

The history books had suggested it might be a long day for the visitors. Their last victory at Old Trafford came on 11 May, 1968 - a day Manchester City pipped United to the league title.

United had endured the same painful outcome when the clubs last met in May. Ferguson and his players had not forgotten the reaction of the Sunderland fans when news of City's late goals reached the Stadium of Light, and it showed.

This was an dominant display, inspired by Michael Carrick in midfield, Ashley Young's prodigious work on the wings, sublime finishing by Van Persie and a workrate and ambition that was, at times, a sight to behold.

It was a performance that added weight to the argument that last week's Manchester derby was more than just a localised tremor. With United in this form and Nemanja Vidic available to shore up a leaky defence, the hope among those at Old Trafford is that perhaps it was the first signs of a seismic shift back towards the red half of Manchester.

Even accounting for the poverty of the football coming the other way, United's attacking play was rapier sharp, their finishing ruthless. For all Sunderland's energy and dedication late on, they were simply outclassed and outpassed for too much of this contest.

The damage was done in four first-half minutes, as United warmed to their task. Young was a constant menace, tormenting Carlos Cuellar with a series of lung-busting runs, full of twists and turns. One such surge down the left took him to the bye-line where he shrugged off a muscular challenge by Cuellar, twisted beyond Sebastian Larsson and crossed.

The ball deflected off John O'Shea's leg, Van Persie killed it with his first touch and sent it high beyond Sunderland goalkeeper Simon Mignolet with his second. Simple but sublime.

A second goal soon followed, as Cleverley swept a curling shot in from just inside the penalty area after a delightful exchange with Carrick.

Rooney, who was always on the same wavelength as Van Persie, was finding space with alarming regularity and might have scored two of his own. One volleyed effort flashed inches wide from the Dutchman's clever knock-down.

Another to stand out was Phil Jones, whose running from deep with tireless energy and ambition constantly challenged the visitors.

And yet Sunderland, driven on by O'Neill who didn't leave the touchline, kept pushing. James McClean might have done better having robbed Rio Ferdinand but only shoot straight at David De Gea from a narrow angle, while Patrice Evra headed Stephane Sessegnon's shot over the bar.

Substitute Conor Wickham tested De Gea, as did a deflected McClean effort but the game was decided just before the hour mark when Rooney and Van Persie combined again to devastating effect.

Young freed the Netherlands international on the left of the penalty area, who tricked his way beyond Cuellar and Titus Bramble before squaring to Rooney who tapped in.

The game all but settled, United were able to bring Vidic into the action after three months on the sidelines with a knee injury.

Three minutes later, Sunderland scored when Campbell rose majestically at the back post to head in Sessegnon's clever cross from the left.

Wickham tested De Gea again as full-time approached, a reminder to Ferguson that for all his side's attacking verve, their weakness at the back will need to be addressed if they are to regain the title at the first time of asking.