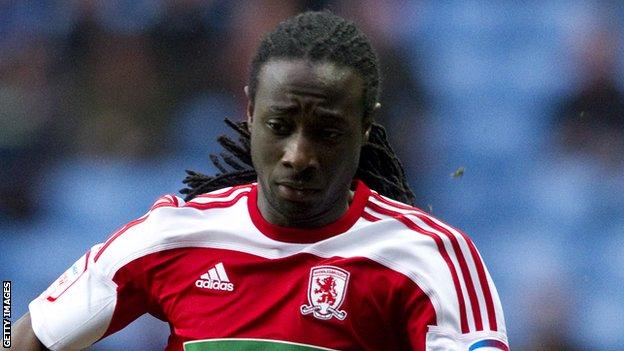 Middlesbrough scored two late goals against Wolves to move back into third place in the Championship table.

Marvin Emnes scored from the spot in the 89th minute after a questionable penalty was awarded when a cross hit Karl Henry's arm.

Striker Scott McDonald then sealed the win at the death, smashing in a second as the visitors became stretched in their search for an equaliser.

The result puts Boro one point behind second-placed Crystal Palace.

Stale Solbakken's Wolves had not won on Teesside since 1951 but looked on course to leave with a point before referee Robert Madley came to the fore after McDonald's centre hit Henry.

Prior to that, Boro started the brighter and attacker Luke Williams forced a good save from Carl Ikeme with the first chance of the game before striker Ishmael Miller - starting his first match since 24 November - curled an effort over the crossbar after a blistering counter-attack.

Wolves responded with a rapid break of their own and centre-back Jonathan Woodgate had to be at his sharpest to prevent Sylvan Ebanks-Blake tapping home.

After the break, Wolves looked the most likely team to claim the three points as midfielder Bakary Sako had several attempts from distance and substitute David Davis saw his dangerous shot deflected into goalkeeper Luke Steele's arms.

The earlier introduction of Emnes up front was to prove crucial as he calmly slotted home the spot-kick and set up McDonald for the second.

The defeat means Wolves are eight points adrift of the play-off places in 18th as they failed to build on the two wins they claimed at the start of the month.

Middlesbrough manager Tony Mowbray: "I'm not going to question the integrity of the officials, they call it honestly every game.

"The boy leant into the ball and that's why the linesman called it how he did.

"It was a huge result for us. It wasn't the most fluid or polished we have played all season but that doesn't matter now.

"We can't play well every week but it wasn't exactly daylight robbery. We worked hard and kept going and I think we got our rewards."

Wolves manager Stale Solbakken: "It was a bad decision. The ball was kicked in very hard and he turned but he couldn't get out of the way.

"For me the referee has to be 100% sure to give such a big decision and I don't think he could have been. I think he should have over-ruled the linesman - it was a very bad one.

"It was a big blow to us because I think we were the better team.

"After the first 20 minutes we played the better football, we created the better chances and we had the momentum. "