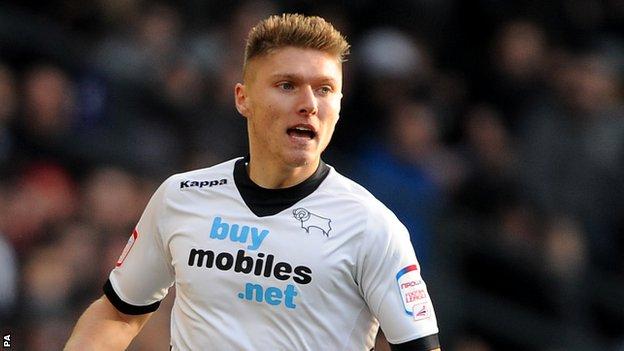 Two goals in two first-half minutes against Bristol City saw promotion-chasing Derby claim their first away win in the Championship since October.

Bristol then fell victim to another centre minutes later when midfielder Craig Bryson headed home after he was picked out by Gareth Roberts.

The result saw the Rams move to within three points of the play-off positions.

Bristol City came into the game having conceded more goals than any other side in the division and goalkeeper Tom Heaton pulled off a superb save at the start to keep out Jacobs' shot from a corner.

Sam Baldock and Albert Adomah then went close for the hosts before they conceded the 44th and 45th goals of their season to Hendrick and Bryson.

Stung by going behind, Robins manager Derek McInnes brought on top scorer Steve Davies at the interval as he sought to end an eight-game winless run at Ashton Gate which stretches back to 25 August.

The decision ultimately went without reward, but the Scottish striker twice went close to scoring with a header from an Adomah corner and a 20-yard curling effort which was saved well by goalkeeper Adam Legzdins.

The loss saw McInnes' men remain one spot outside the relegation positions but level on points with 22nd-placed Barnsley.

"It doesn't matter what formation you employ if you fail to defend crosses as we did for Derby's two goals.

"We also have a problem at the moment with being vulnerable after we concede.

"By taking their chances, Derby earned the right to get 11 men behind the ball in the second half and that made it very difficult for us.

"If we had taken our chances it would have been a different story. Liam Fontaine and Sam Baldock should have scored and there were other opportunities."

"We know that if we are to get where we want to be this season our away form has to improve, so this was a huge result.

"Bristol have been struggling at home, but they are still a dangerous side with some terrific away wins to prove that, we took our chances and then kept the ball well to kill off the game, so all credit to the players.

"Our aim remains as it was at the start of the season - to be a top-half team and see where that takes us.

"A clean sheet was a bonus because we haven't had too many of those and overall I'm very happy with the performance."