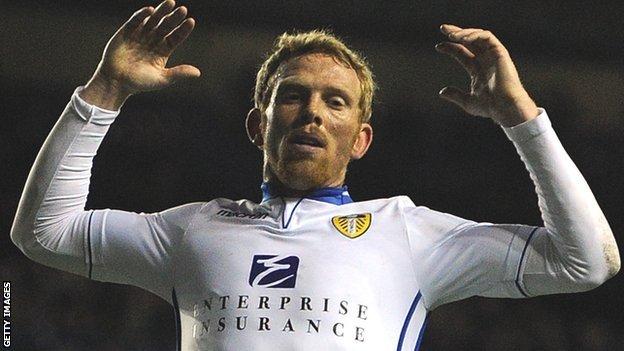 Leeds United moved to within four points of the Championship play-off places as they defeated Ipswich Town.

Paul Green doubled Leeds's lead, firing in from a Thomas pass after he had been played in by ex-Town man David Norris.

Lee Martin and Michael Chopra both missed from close range as Ipswich lost for the first time in five games.

Diouf, who signed a new 18-month deal on Friday, had United's first chance as he collected Green's chipped pass but was denied by Henderson.

But there was nothing the Ipswich goalkeeper could do as Leeds took the lead. Thomas, returning to the side after a hamstring injury, scored from inside the six-yard box.

Luciano Becchio had a couple of chances to make it 2-0 but headed over from Sam Byram's cross and then had a shot saved by Henderson after another Byram pass.

The Leeds fans had to wait until the second half to extend their advantage and it came from a defensive error from Bradley Orr.

He failed to deal with Alan Tate's clearance and Diouf released Norris, who played in Thomas and his cross was powered home by Green.

Ipswich, who had won their last three matches and five of their last eight games since Mick McCarthy became manager, should have pulled a goal back late on but Martin and Chopra wasted chances.

The victory, Leeds' fourth in five games, takes United up to 12th, while Ipswich are 20th, five points above the relegation zone.

"I am still trying to get Jerome fit enough to play a full 90 minutes.

"It is more important to me that he plays against Middlesbrough next Saturday than Chelsea [in the Capital One Cup quarter-final] on Wednesday, so we will have to see. Knowing Jerome, he will want to play against Chelsea.

"I won't play my full team and I am sure Chelsea won't, but they have more players they can rest than we have. I am sure it will be competitive, whatever team I put out."

"The goal we gave away from the corner kick really disappointed me and that put us on the back foot.

"Luciano Becchio had a great chance just before half-time and I don't know how he missed.

"But I thought we were the best team in the second half but that doesn't mean anything as we got beaten.

"We didn't have that bit of quality and their second goal was a piece of beauty.

"It looks like it was a comfortable win for them but it was anything but and even at 2-0 down we had some great chances."