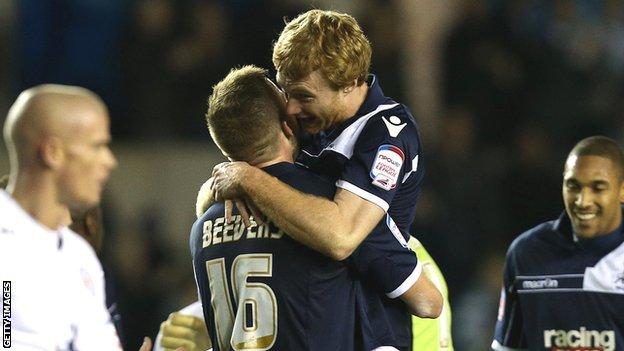 A goal from Chris Taylor took Millwall back into the Championship play-off places courtesy of victory over fellow promotion hopefuls Leicester.

Substitute winger Taylor side-footed home Andy Keogh's cross midway through the second half of a scrappy match to seal the Lions' win.

It meant a return to winning ways for Millwall after their 13-match unbeaten run ended at Ipswich last week.

It also condemned the Foxes to their sixth defeat on the road this season.

The two sides now have just a point and a place separating them in the table with City in fifth on 37 and Kenny Jackett's side sixth on 36.

It was Leicester who made the livelier start in south London with David Nugent seeing a shot deflected wide and Andy King having an effort blocked.

Millwall soon asserted themselves on the game, though, and on-loan striker Chris Wood put a header wide before Liam Trotter forced a smart save from Foxes keeper Kasper Schmeichel after finding space in the area.

The home side continued to dominate after the break and they broke the deadlock in the 67th minute when half-time replacement Taylor converted Keogh's cross from close range.

Leicester attempted to hit back and Nugent fired wide before home keeper David Forde saved Wes Morgan's stoppage-time shot, but Millwall held on for the win.

"We had to weather the storm and we defended very well. But then we started to create chances of our own and eventually made it a dominant performance.

"The goal came at the right time and gave us something to hold onto, to see the game out.

"We showed some guts, we had to be at our very best against a Leicester side who have real quality across the board. We defended very well in injury time, there were balls flying in all over the place but my two centre-halves handled that very well.

"Darius Henderson is coming back soon and that will help us because we need to maintain our position and push forward to build on this great start."

"I see the game as a bit of a missed opportunity for us. We did quite well in the first half but conceded a sloppy goal which is difficult to take.

"Going into the game, we thought we had a good chance to get something out of it but we couldn't find that bit of quality in the final third.

"But you've got to give Millwall credit, they played with great spirit and defended everything we threw at them. As soon as we created the opportunities our execution wasn't quite right and we couldn't open them up.

"We put them under a lot of pressure in the first half, but in the second half they came out with a higher tempo and made it difficult for us. We made too many unforced errors and allowed them to keep it in our half when really it was straightforward to clear the ball, but that happens sometimes."