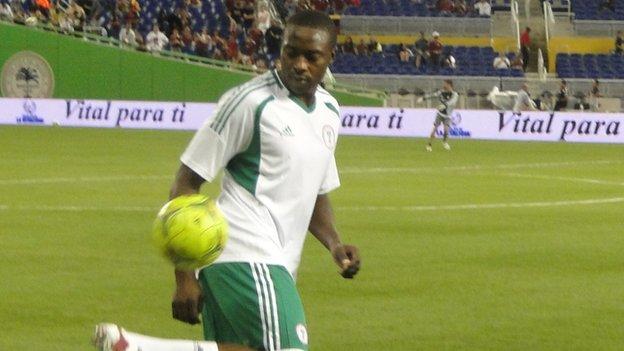 Newcastle United striker Shola Ameobi says an Africa Cup of Nations call-up for Nigeria would be a dream come true.

The 31-year-old made his long-awaited debut in the Super Eagles' 3-1 friendly win against Venezuela last month.

"You can call me a late bloomer at international level but I'm grateful to God for this big opportunity."

The former England Under-21 was brought on as a second-half substitute by Nigeria coach Stephen Keshi in the friendly tie in Florida.

And he is now targeting a coveted place in Keshi's Nations Cup squad in South Africa.

"The African Cup of Nations is what the European Championship is to others - so it will be a dream come true to represent my motherland.

"This is a big chance and I know this is the closest for me. Hopefully, I can live that dream when and if selected.

"I need to earn it because the are several players out there equally deserving of that chance to represent a country like Nigeria."

Ameobi, who was born in Zaria, northern Nigeria, before moving to England with his parents at the age of five, has just returned from a groin injury.

After starting up front alongside his younger brother Sammy in the club's Europa League tie against Bordeaux on Thursday, he is now ready to fight for a place at club and international level.

"There's always that healthy rivalry to fight for a place," he said.

"You just need to keep giving your best and hope to stay fit and healthy.

"The club is still in Europe and Nigeria is preparing for a big tournament. It's a big honour to be considered by both."

Nigeria will take on African champions Zambia, as well as Ethiopia and Burkina Faso, in Group C of the tournament, which takes place between 19 January and 10 February.