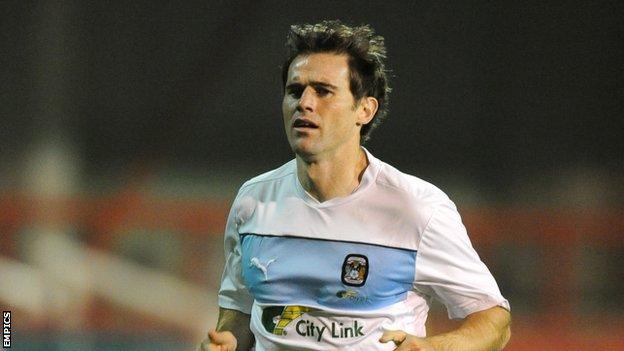 The 35-year-old, who is the Republic of Ireland's third most capped player with 110 international games, had not played for the Sky Blues since 23 October.

He made 614 appearances for Preston, West Brom, Sunderland, Everton, Wigan, Hull, Huddersfield and Derby and only joined City in the summer.

The defender-midfielder is working as a BBC Radio 5 live analyst.

Kilbane made 66 consecutive competitive international appearances, playing every qualifier and tournament game for the Republic between 1999 and 2011. He was only four away from Billy Wright's world record when a back injury ruled him out of a Euro 2012 qualifier with Slovakia and he never played for his country again

"I would like to thank the directors, coaching staff, players and supporters at Coventry City Football Club for my brief time at the club and wish them all the best for the future," he told the club website.

Kilbane joined Coventry in July on a one-year deal after leaving Hull and was named captain in August. However he only made 12 appearances for the Sky Blues before retiring.

The Preston-born player began his career at his hometown club as a winger and moved to West Brom, before having spells in the Premier League with Sunderland, Everton, Wigan and Hull.

The last two and a half years of his career have been spent in the Football League following Hull's relegation, and he had loan spells with Huddersfield and Derby, before his summer move to the Ricoh Arena.

His final outing was as a substitute in October's 2-1 defeat at Brentford.