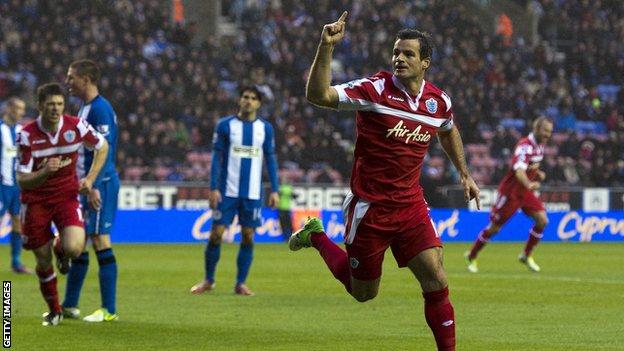 Ryan Nelsen says Queens Park Rangers can have no excuses after setting a new unwanted record for the longest winless start to a Premier League season.

The Hoops were within sight of their first league away win for 13 months after coming from behind to take the lead at Wigan on Saturday.

But James McCarthy's equaliser in the 2-2 draw means the Hoops are still without a win after 16 games.

"It's astonishing to tell you the truth," said QPR defender Nelsen.

Is there still hope for QPR?

QPR are the first top-flight team since Sheffield United in 1990-91 to fail to win any of their opening 16 games. The Blades won their 17th at home to Nottingham Forest 3-2 and went on to finish 13th in the table

"There's not been that many games where we have been out of it, but that's the fine line of the Premier League.

"There's no excuses. We're confident we can still get out of it. We feel if we can get one win then we will get two and we'll get going."

QPR manager Harry Redknapp was frustrated after watching his bottom of the table side fail secure a first win since he took charge last month.

McCarthy had put Wigan ahead before Nelsen equalised and substitute Djibril Cisse fired the Hoops into a 2-1 lead with 19 minutes remaining.

But the lead was short lived as poor defending allowed McCarthy to equalise and deny QPR a first away win since November 2011.

Redknapp's team are eight points from safety and the former Tottenham manager says his side must win at least one game this month to make spending in the January transfer window worthwhile.

"If we don't win a game or two then I wouldn't ask them to spend any more money," he said. "I think it would be unfair to the owners.

"I wouldn't tell them to go and spend big money on a couple more players if we're that far adrift. You've got to be realistic.

"But it's still all to play for because other teams are not winning.

"I've been in worse situations and managed to get out of it. It's not impossible but it's going to be hard.

"I don't want to wait until the last 10 games to start winning. A win now would make all the difference."

Wigan boss Roberto Martinez thought his side deserved more than a point.

The Latics were missing seven players through either suspension or injury, while an eighth, playmaker Shaun Maloney, was only fit enough for the bench.

"We are disappointed because to concede two goals is always frustrating," said Martinez.

"But I was very pleased with the manner in which we reacted to going 2-1 down.

"It would have been all too easy to panic, to lose our composure but I thought we were very mature and we're disappointed that we couldn't get any more because the chances were there."