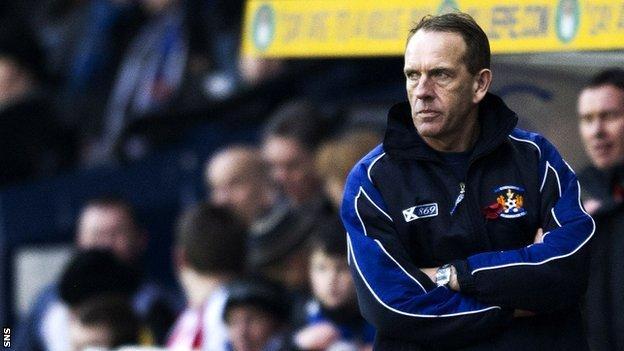 Kilmarnock manager Kenny Shiels felt suspensions meant his side could not cope with Celtic's "positive energy".

His side failed to cause the Hoops a European hangover as they lost 3-1 to the Glasgow club at Rugby Park.

"We've got players suspended and they don't, so there's a distinct difference there," Shiels told BBC Scotland.

"We're missing our captain because of suspension. These things don't happen to the likes of Celtic, they don't lose players with suspension"

Celtic captain Scott Brown gave the Hoops a first-half lead, side-footing into the net after good work down the right by Adam Matthews.

Brown turned creator just after the hour mark when he crossed to give Joe Ledley a straightforward finish.

"We didn't match the runs of Ledley and Brown," added Shiels.

"I think it's difficult. We knew they would come here with a sense of achievement.

"They're going to be firing on all cylinders, they've got the best players."

And on his ongoing spat with footballing officialdom, Shiels insisted that lies had been told to him.

"It'll come out, I'm not wanting to speak about it at the moment," he said.