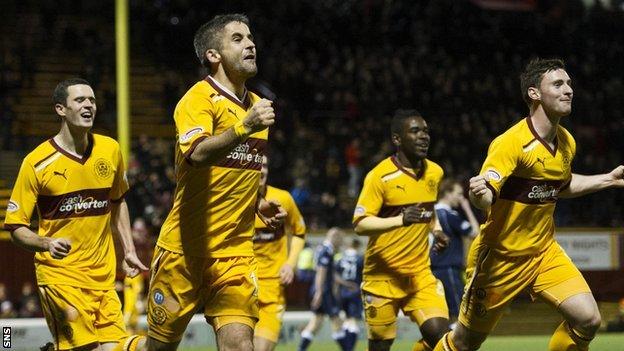 Motherwell manager Stuart McCall voiced his relief after his side recorded only their second home league victory of the season.

Captain Keith Lasley's strike gave the home side victory in an entertaining match against Ross County at Fir Park.

And McCall believes that the victory will change his side's home fortunes for the rest of the season.

"All in all, it's a great three points. We needed the monkey off our back with the home form," he said.

"I thought in the first half we played some terrific football and I was disappointed to come in at half-time level.

"Some of the moves in the first-half were terrific, we just didn't finish them off.

"In the second half we started brilliantly, and I think it kind of rocked us when we went 2-1 ahead.

"I thought they played well in the second half. We weren't at our best."

McCall also praised the attacking intent of the visitors.

"In fairness to Ross County, they came here and played two strikers," he continued.

"They didn't come and sit in, they came and had a go.

"And I think, because of their attitude, it made it a more open game."

"He's found a really good bit of form at the moment and he has been producing that on a consistent basis," he said.

And McCall also talked up his side's chances in their Scottish Cup replay with Aberdeen.

"People will talk that last season Aberdeen knocked us out of the Cup here but we managed to beat them twice in the league," he said.