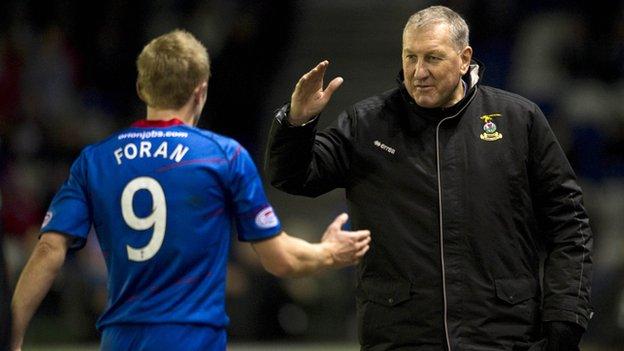 Terry Butcher hopes his Inverness team's 3-0 win over Hibernian will convince people that the Highlanders can finish in the upper reaches of the Scottish Premier League.

"We said we felt we could be a top-three side," he told BBC Scotland after his team moved into second place.

"People might have thought that was a bit bold but that's what we believe. We enjoy being up there.

"The boys are relaxed about it now and we aim to stay there."

From the end of September, Inverness have amassed 23 points from a possible 30 and they are still in the Scottish Cup, in which they host Highland rivals Ross County in a replay on Tuesday.

And their goals against Hibs will delight their fans, with three crosses being headed past Ben Williams by Ross Draper, Richie Foran and McKay.

"We get a lot of men forward and the boys have a good understanding now. The boys have done it week, in week out," said Butcher.

"The boys will now focus on Ross County on Tuesday in the replay. It'll be a good challenge.

"Good games are coming thick and fast for us, which is lovely.

"I'm sure it will be a full house now. Everybody wants to see the next part of the Highland soap opera.

"There were so many story lines last week [in the cup tie that ended 3-3], it was ripe for a soap opera so who knows what both teams can conjure up on Tuesday?

"We could play each other six times this season. It's the third instalment on Tuesday."

Praising the quality of crosses from players such as Graeme Shinnie and David Raven, Butcher went on to note the improvement his team have made over recent seasons.

"The players now know that these boys can put good crosses into the box and pick people out. So they have the confidence to make the runs and get in the areas," he said.

"Last year they didn't know how good the crosses would be so you don't then try to get in front of the opposition.

"Two years ago when we finished seventh in the league, after 16 matches we had a point more than we have now.

"Two years ago we never won again until March so we have a lot of opportunities to beat that points total.

"If we do that, it should be a happy season.

"I liken ourselves to Team GB here. We have got people from Scotland, England, Ireland, Northern Ireland, Wales and one Spanish goalkeeper."