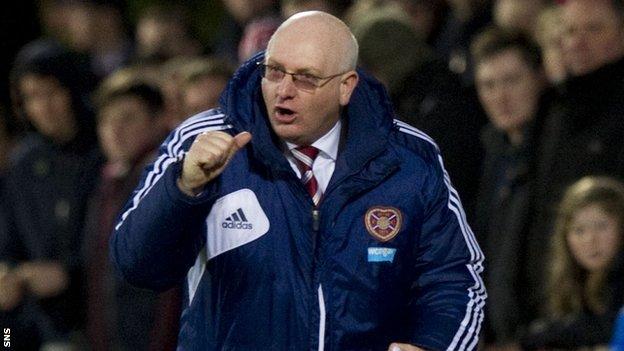 Hearts manager John McGlynn was pleased to put a smile on the face of everyone connected with Hearts.

A 2-0 win over Aberdeen saw his side bounce back from losing to rivals Hibs.

"It was a great response from losing the derby game last week," McGlynn told BBC Scotland.

"We were all hurting - everyone Hearts-minded - all the supporters, players, directors, whoever hurt all week. It's great to give them something to smile about coming out the stadium tonight."

Ryan Stevenson's penalty meant he got his first goal since re-joining Hearts and Calum Paterson doubled the Jambos' lead in the second half.

Paterson was Stevenson's replacement after the ex-Ipswich player suffered a blow to the cheek and was removed at half-time.

"He [Ryan Stevenson] was a bit groggy. The medical staff had a look at him at half-time and we decided there was no way he could go out," said McGlynn.

"We're delighted for young Calum to come on and replace Ryan and then get the second goal.

"We just thought we would take a wee bit pressure off him today [by starting him on the bench] and we're delighted he got a goal.

"That'll not do him any harm whatsoever."

And McGlynn is more than satisfied with his side's defending this season.

"We're delighted with the amount of clean sheets we've had. It was just a matter of getting goals and we got two today.

"Whether it's a catalyst or not, I'm not sure, but what I think we should do is just enjoy tonight and not look too far ahead."