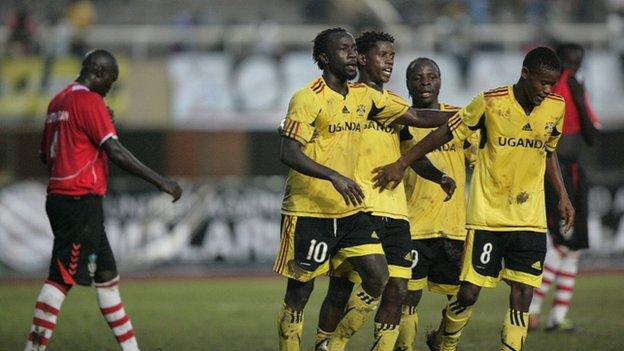 Uganda maintained their dominance in the East and Central African region with a hard-fought 2-1 victory over arch-rivals Kenya in the final of the Cecafa Senior Challenge Cup.

An own goal in the 26th minute gave the home side the lead, with Uganda striker Robert Ssentongo's shot diverted by Harambee Stars skipper Anthony Kimani past goalkeeper Duncan Ochieng.

Kimani responded in the second half by getting his name on the scoresheet again, this time for Kenya, to bring his side level.

But just three minutes later, the Ugandans, pushed on by the home fans, won a free-kick that was quickly taken by Godfrey Walusimbi and Geoffrey Kizito nodded in past Ochieng for the winner.

It was all celebrations after the final whistle, as Uganda collected their 13th Cecafa title - eight more than their Kenyan rivals.

Cranes skipper Hassan Wasswa expressed his pride at leading his side to victory on home soil.

"I feel very proud, because it is my first time to captain the national team and win this Cecafa title," Wasswa told BBC Sport.

Cranes coach Bobby Williamson was also full of praise for his team, after they won all their games and conceded only one goal in the entire tournament.

"These boys are a great group and this was a real test, especially after conceding towards the end of the game," Williamson said.

"They reacted quickly and got the winner."

Kenya coach James Nandwa said he was happy with his team for reaching the final.

"This is a great achievement because no one gave us a chance from the start," Nandwa said.

In the earlier third-place play-off, Zanzibar were surprise winners over Tanzania, winning a penalty shoot-out 6-5, after the game had ended 1-1.

Mwinyi Kazimoto had given the Tanzanians a 20th minute lead, but Ally Othman levelled with five minutes to go.

"It is a sweet win over Tanzania and we shall go back home very proud of a third-place finish," Zanzibar skipper Nadir Haroub Cannavaro said.