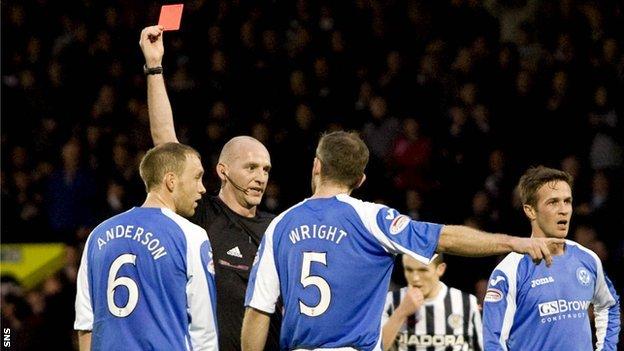 St Johnstone assistant Tommy Wright described his players as "truly magnificent" after they survived a late pounding to hold St Mirren to a 1-1 draw despite being down to nine men.

Steven Anderson was sent off just before the break with the Perth side 1-0 ahead and Chris Millar followed with 20 minutes remaining.

"I'm proud of them all," said Wright.

"Not many teams can go down to nine men and still take something from the game."

Wright was the man in the dugout for St Johnstone with manager Steve Lomas in the stand after starting a long spell suspended from the touchline.

Going down to nine men is not a comfortable experience

"It reiterates the team spirit we have at the club," said the Saints assistant.

"We have a very tight unit and they are willing to put bodies on the line.

"But I would not like to go through that in every game.

"Going down to nine men is not a comfortable experience."

Lomas decided not to address the media following his latest charge from the Scottish Football Association for kicking a water bottle during Saints' defeat by Hibernian.

He was a frustrated figure again, albeit in the stand, but Wright said he had "no complaints" with referee Bobby Madden's decisions in sending off Anderson for a last-man challenge and Millar for a second yellow card.

"I don't think it was deliberate by Steven, he just slipped," said the assistant.

"And Chris knows he should not have gone in for that tackle after being booked already."

The red cards do not rule out Anderson and Millar from St Johnstone's delayed Scottish Cup tie against Cowdenbeath, now scheduled for Monday.

Should the game survive the wintry weather that forced the postponement of much of the Scottish Football League card, Wright believes his squad can cope with any tiredness resulting from playing for so long short-handed.

"Frazer Wright is due a suspension as well, but we have enough players to hopefully cope with Cowdenbeath," he said.

Murray Davidson had put the Perth side in front but St Mirren equalised through Paul Dummett, who pounced after goalkeeper Alan Mannus saved from Kenny McLean.

"It's a great save, but fair play to their player for following up," said Wright.

Mannus himself was frustrated that the ball had fallen to a St Mirren player.

"From a goalkeeper's point of view, you hope it goes out or to one of your own players," he said.

"It's disappointing, but we are happy to come away with a point.

"The boys in front of me were excellent."