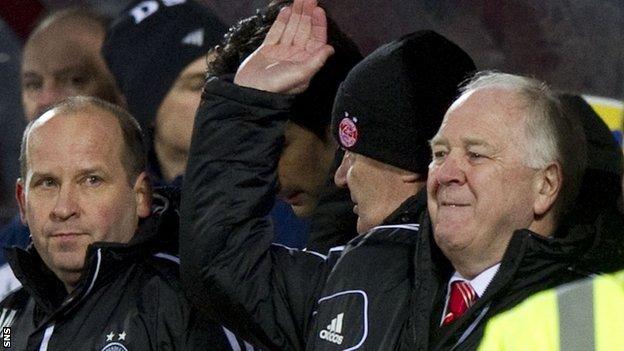 Aberdeen manager Craig Brown says there is still time for Ryan Fraser to decide to stay at Pittodrie.

Fraser, who turned down the offer of a new contract missed Saturday's 2-0 defeat to Hearts due to injury. He has made 16 appearance for the Dons.

"We've got to hope that he might have a change of heart - people are entitled to change their mind," Brown told BBC Scotland.

"I think we let Ryan and his father and his agent make their decision."

As it stands, there has yet to be any official interest shown in the tricky winger.

"If someone comes in with an offer then the board of directors would discuss the offer," said Brown

"But, as of this moment, we haven't had any offers, and I'm assured of that even from his own agent."

Aberdeen have now not scored against Hearts in over 13 hours of football and Brown felt his side were unlucky not to have brought that record to an end.

"We had umpteen chances in the second half to overcome that unfortunate situation," he said.

Ryan Stevenson and Calum Paterson scored a goal in each half to seal the victory.

Stevenson's came via the penalty spot after he was adjudged to have been pushed by Josh Magennis.

"I don't know where else the player [Magennis] puts his arms when he's moving back to head the ball," said Brown.

"The only alternative is his arms are down pinned by his side - you don't go back like that.

"The first goal's very important. It was a goal that came out of nothing - it was unexpected.

"We've played a match here at Tynecastle and our goalkeeper's not had a save of any note to make in the game.

"We had the better of the chances both in the second half and towards the end of the game."

Aberdeen now prepare for their Scottish Cup fourth round replay with Motherwell at Fir Park on Tuesday.