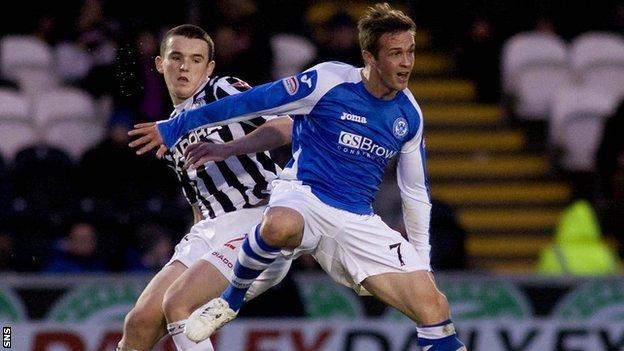 St Mirren manager Danny Lennon was disappointed that his side could not take full advantage of St Johnstone being down to nine men but hailed the performance of John McGinn.

The 18-year-old midfielder was man of the match in the 1-1 draw in Paisley.

"I thought he was absolutely magnificent," said his manager.

"He could have had two or three goals today. But we have to put the ball on target and that has been our downfall in the last three or four weeks."

Lennon said he could not fault the effort of all his players.

"We had a fantastic tempo to the game and came out of the traps really well," he said.

"We played on the front foot and had numerous opportunities.

"We have done a disservice to our fans. I thought they were thoroughly entertained, but we have to be more ruthless in front of goal."

Lennon thought his side had coped well with the alterations he had to make after red cards shown to Steven Anderson just before the break and Chris Millar with 20 minutes remaining.

However, Lennon was disappointed that St Johnstone midfielder Murray Davidson was able to give the visitors an early lead.

"We had told them before the game that it was important to track his runs into the box," said the Buddies manager.