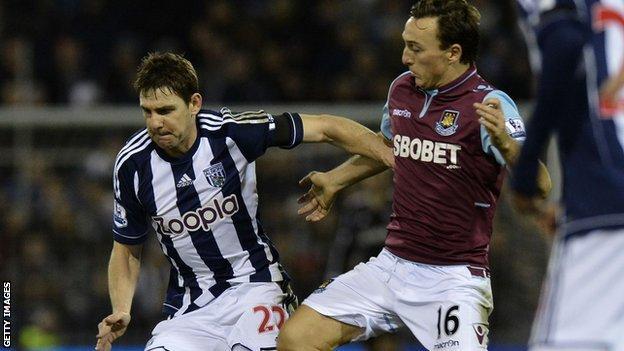 An uninspiring match between West Brom and West Ham ended with both earning a point from a goalless draw.

Hammers defender Winston Reid fired a close-range shot over the bar in a rare first-half chance before the game improved after the break.

James Morrison flicked a shot onto the West Ham crossbar, while Gary O'Neil curled an effort wide for the Hammers.

Morrison was again denied by the woodwork when he headed a corner against the crossbar late on.

Both sides might be happy with a point after recent stutters in form but the game made for a disappointing spectacle compared with the sparkling starts to the season both clubs had enjoyed.

West Brom ended a run of three straight defeats to remain sixth, while 11th-placed West Ham, who had lost four of their preceding five league games, earned their point despite the depleted squad at manager Sam Allardyce's disposal.

The Hammers boss's predicament meant he only named six substitutes rather than the permitted seven.

That did not appear to bode well against a Baggies side whose tally of home points this season was the third highest in the division, behind only Manchester United and Manchester City.

But West Brom struggled to show that form early on as the visitors comfortably kept their hosts at arm's length, with central defensive duo James Collins and Reid, in particular, proving a stubborn barrier.

West Ham keeper Jussi Jaaskelainen was given a rare scare when Baggies striker Shane Long cut inside from the right, only for his left-footed shot to trickle a couple of yards wide.

"I'm sure West Ham manager Sam Allardyce would have settled for a point with all his absentees. West Brom were frustrated on an afternoon of few opportunities when the Hammers probably did enough to earn a point."

Albion's lack of invention or intensity, allied to West Ham's solidity, was making for a dour affair, and it was the visitors who came closet to opening the scoring in the first half.

Collins sent a header back across West Brom's goal where Reid shot over from six yards, before Baggies keeper Boaz Myhill fended away a fierce Carlton Cole strike.

The match livened up after the break and the home side went close when Zoltan Gera sent a corner back across West Ham's goal where Morrison flicked a shot onto the top of the crossbar.

The home side had their own escape, with O'Neil curling a shot narrowly the wrong side of the post.

West Brom began to show more urgency and Jaaskelainen had to parry a swerving Gera strike before catching the looped follow-up effort from Long.

O'Brien volleyed a Mark Noble free-kick over for West Ham as they almost stole a goal from a set-piece before Morrison again struck the frame of the goal after rising highest to meet Chris Brunt's corner.

"If you look at the season as a whole we have done OK. Sometimes you have to draw games. Today there were not many chances.

"Both sides huffed and puffed a little bit. If you assess the game properly then I think a draw was a fair result.

"I don't think either ourselves or West Ham played as well as we can. We knew today we had to stop a run of three defeats."

"Today we were a very well organised, solid and hardworking team who have shown very good defensive qualities.

"Even though West Brom had a lot of territorial advantage we have come off with Jussi only having to have made a couple of saves.

"It is a really good result for us. Under the circumstances with our injury list, we are very pleased. When you pick up a point with seven of your first team missing that is very pleasing. The lads who went out there did us proud and picked up a precious point."