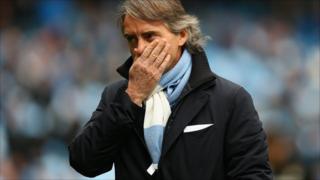 The City boss admits he was "upset" with his side's defending as he watched them fall behind to a double strike from Wayne Rooney, stating United "didn't touch the ball" for the first 20 minutes of the game.

The derby defeat is City's first home loss in the league since losing to Everton on 20 December 2010.