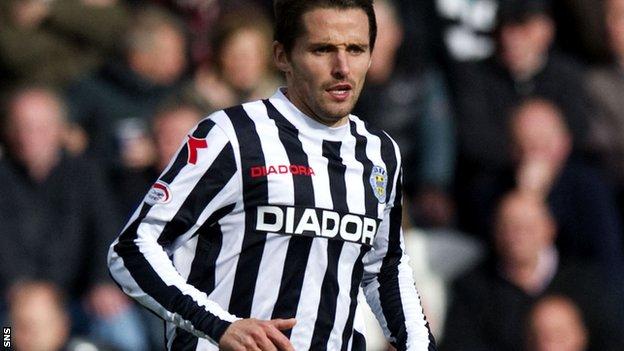 Rangers won 1-0 at Hampden in 2010 despite having two men sent off, but this time the Buddies managed an equaliser through Paul Dummett.

"The final defeat by Rangers went through my mind as soon as St Johnstone had the second man sent off."

Dredit to St Johnstone, they defended really well and probably deserved a point

The Perth outfit took a first-half lead through Murray Davidson, but a straight red card for Steven Anderson just before the break followed by a second yellow for Chris Millar ensured the home side had most of the late pressure.

"It is one of those games where you have to concentrate on not losing the game because you push forward so much," said Mair.

"It was exactly the same here as at Hampden. Their back four stayed rigid and they were hard to break down.

"But, credit to St Johnstone, they defended really well and probably deserved a point.

"I can't fault any of the St Mirren players as I don't think we could have done any different.

"We must have had close to 20 shots, but the goalkeeper made saves and we had shots blocked and cleared off the line.

"One day, we will score a few and a team will on the end of a hiding."

Mair is realistic enough not expect that in their next match, away to reigning champions and Scottish Premier League leaders Celtic.

"Parkhead will be a hard shift, but we have to look forward in a positive manner as this was our fourth game without defeat," he said.