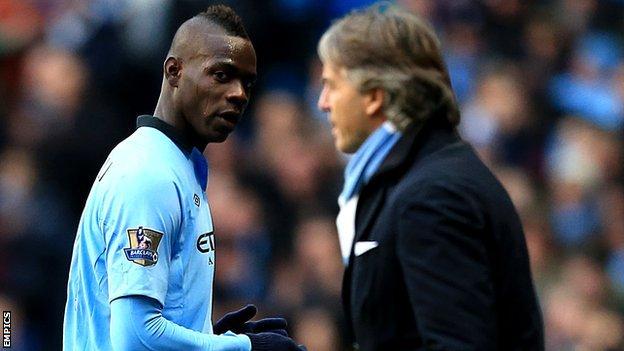 If Roberto Mancini had got his wish in the summer it would have reduced the need for his increasingly high-risk strategy of placing trust in the mercurial talents of Mario Balotelli.

Manchester City manager Mancini had desires on Robin van Persie as his showpiece summer signing. It would have sent a sign of his determination to keep Manchester United away from their newly won Premier League title.

Instead, the former Arsenal captain expressed his wish to move to Old Trafford and Mancini was left to harbour the wildly optimistic notion that his 22-year-old fellow Italian might produce his undoubted ability on a more consistent basis.

The potential for a shift in power based on Van Persie's chosen destination was graphically illustrated in a pulsating, stormy Manchester derby that saw the Netherlands striker further cement his place in the affections of United's followers.

Van Persie's influence was fleeting but crucial, a late deflected free-kick securing United a 3-2 win that gives them a six-point lead at the top of the table. Balotelli's influence was so negligible that it called Mancini's own judgement into question.

After City concluded an abject Champions League campaign with defeat against Borussia Dortmund in Germany on Tuesday, Mancini needed a big response, and preferably a victory, against United.

There is no suggestion Mancini is under pressure for his job at this stage - but reality dictates he needs to win the Premier League once again if his position is not to come under serious scrutiny, not least because of City's failure in Europe.

It made Mancini's decision to plump for Balotelli, a peripheral and low-key figure this season, ahead of Carlos Tevez against United even more of a gamble.

It was a gamble that failed.

Balotelli was not the sole reason City lost but it was almost impossible to fathom the logic of his selection, unless Mancini was backing a hunch that he might produce his "Why Always Me?" magic of City's 6-1 win at Old Trafford last season.

It was not to be. Balotelli was marginal at best and fortunate to even see the start of the second half before another careless squandering of possession frustrated Mancini once too often and Tevez was beckoned.

Balotelli, predictably, glared at Mancini before marching down the tunnel. He could have no complaints because all he had done was underscore the error of his manager's ways by picking him.

City's fans had already registered their impatience with Balotelli - and they have been unswervingly loyal even when he has put them to the test - and more joined in when he walked off.

Tevez helped City pull back Wayne Rooney's two goals with strikes from Yaya Toure and Pablo Zabaleta until Van Persie's intervention decided the destiny of the points - and consigned Mancini's men to their first home defeat since facing Everton on 20 December 2010.

The dynamic of Mancini's relationship with Balotelli is fascinating. For such a notoriously hard-line and authoritarian manager he has indulged the young maverick through all his tribulations, but there comes a time when indulgence must end.

Mancini often declares his love for Balotelli the player and the person and this manifests itself in the usual ways. He gets impatient with him quicker than others - he was gesticulating in his direction only minutes into the game - but forgives him even more swiftly and hopes things will be better next time.

Many would regard it as a weak spot because there is a growing body of evidence that suggests Mancini should cut his losses and accept Balotelli will never produce consistency, certainly not at City.

In Mancini and City's current position, and there is still so much to play for, he cannot simply trust to luck and the hope Balotelli will deliver for him.

City are still well placed to push United and retain the title but it will become increasingly difficult for Mancini to be convinced Balotelli can play his role. The temperament looks too flawed; the moments of quality too rare.

The time is coming when Balotelli, in terms of performance, either has to put up or shut up.

Balotelli has great ability, even his most ardent critics would accept that, but it is a fat lot of good to Mancini and City if he keeps it hidden from view on an almost permanent basis.

Mancini had a decidedly mixed day as United took a grip on the pursuit of the title. He was unfortunate to lose influential captain Vincent Kompany early on - but his decision to replace him with Kolo Toure, who looked unfit for purpose, rather than Joleon Lescott was questionable.

The logic states, confirmed by Mancini himself, that he did not wish to play with two left-sided central defenders by pairing Lescott with Matija Nastasic - but does another logic not state it might be wiser to pair the better defenders, even if they both favour the same foot?

These were questions arising from a magnificent game of football sadly marred by incidents amid the celebrations following Van Persie's winner.

Manchester United's when he was struck by an object thrown from the crowd and City keeper Joe Hart needed to intercept a pitch invader with designs on getting at the defender.

City duly apologised and it is sad such a tiny minority should scar what was a wonderful afternoon of entertainment.

Ferdinand was able to laugh off the incident on Twitter later: the pain eased by a vital victory. For City the agony might be a little more enduring.

It has been a bad week for the champions - now Mancini must finally decide how to solve a problem like Mario.

655 comments
Back to top
unknown