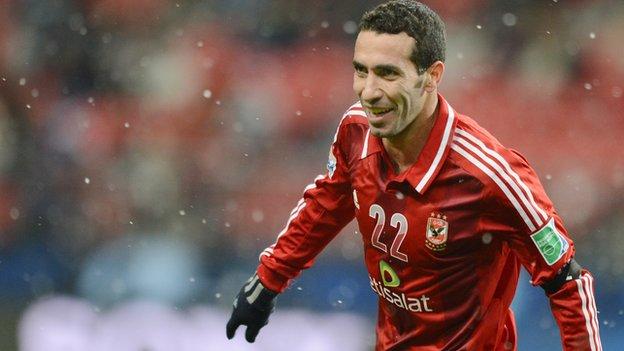 Ahly's talismanic striker Mohamed Aboutrika came off the bench to drill home the winner 12 minutes into second half.

Al Ahly, wearing black armbands in memory of the 72 fans who died in the Port Said Stadium disaster in February, started at a frenetic pace and got their reward after only 15 minutes when Elsayed Hamdi scored from inside the box.

The Japanese champions spurned two opportunities before half-time and they paid the ultimate price after the break when Aboutrika punished them for a defensive slip-up to earn his side victory.

The only downside for Ahly was an injury for captain Hossam Ghaly, who was carried off clutching his knee.

Hiroshima also suffered an injury scare, goalkeeper Shusaku Nishikawa was taken off on a stretcher with blood stains on his jersey after catching a knee in the face in only the third minute.

"It was a very tough match," said Ahly coach Hossam El Badry. "We tried to be aggressive at the beginning and we started the match very well.

"Hiroshima were very organised but we had done our homework and I think we deserved to win."

African champions Ahly will face Brazil's Corinthians, holders of the Libertadores Cup, in the tournament's first semi-final on Wednesday.

Earlier on Sunday, Mexico's Monterrey overpowered South Koreans Ulsan Hyundai 3-1 in the first quarter-final to set up a showdown with English Premier League side Chelsea.