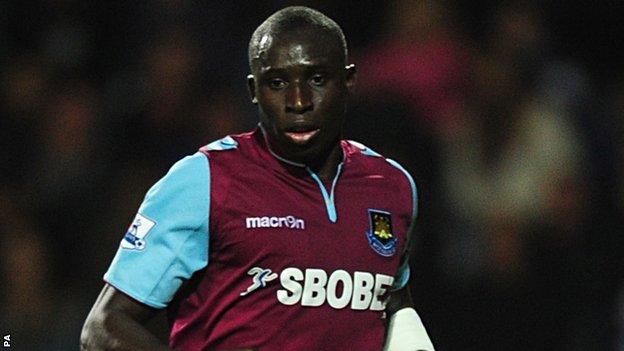 West Ham's Mohamed Diame could be out for three months after tearing his hamstring during Sunday's 3-2 home defeat by Liverpool.

Diame, 25, was stretchered off with his team in the lead but Liverpool scored twice in the closing stages to win.

The Senegal midfielder has excelled since joining from Wigan in the summer.

"I would expect, in medical terms, for it to be a grade three [injury] and that could be anything up to 12 weeks," Hammers boss Sam Allardyce said.

"It does not take a medical expert to know it is a serious hamstring tear when he falls and stopped the way he did. For us he is about the start and build-up of most of the creative side of our game - he runs at them [defenders] with pace and ability that puts them on the back foot.

"That is what we have lost and what we will be missing for a number of weeks so we are going to have to be a bit more dogged and resilient with the players we have got available, rather than have the more creative side we have had from Mo."

Diame returned to West Ham's starting line-up after coming on as a substitute and scoring against Chelsea in last weekend's 3-1 victory and he was a dominant figure at Upton Park once again.

However, he was forced off in the 73rd minute after he pulled up abruptly and fell down clutching his leg in agony.

If the French-born battler is sidelined until mid-February he could miss 10 Premier League fixtures, as well as the FA Cup third round tie against Manchester United on 5 January.

On Friday, West Ham chairman David Gold confirmed rumours that Diame had a release clause in his contract after he was linked with a move away from the club following the impressive start to his career in east London.

Allardyce stated he would rather deal with speculation about his player's future in the January transfer window than be without him for the coming months.

"I would sooner have that aggravation in January with people trying to get him than lose him for the period of time, eight to 12 weeks," he said.

"I have had a number of hamstring injuries myself in my time, when you go down like that you know you have really got [a bad] one. We will wait until it has settled down and then scan it, we will find out exactly how big the damage is and move on from there."