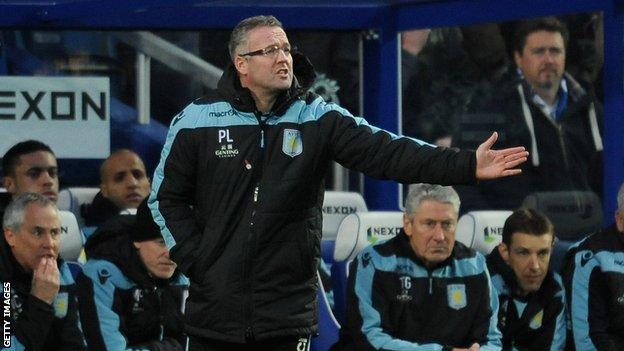 Aston Villa manager Paul Lambert says he wants an amicable end to his legal dispute with Norwich, but is expecting abuse from some Canaries fans.

Lambert and his former club are suing each other for alleged breach of contract after his departure in June.

On Tuesday he returns to the club for the first time for a Capital One Cup quarter-final.

Is it a source of sorrow it's ended up how it has? Yes, it should never have been the way it is

"The sensible ones would maybe think 'you've done all right', but I know you might get stick," said Lambert.

"I really don't know what to expect but it's not something I'm actually too fazed about."

He said he was prepared for any abuse that might come his way due to his time as a player at Celtic and their rivalry with Rangers.

"When you have been involved in that, then you can handle anything," he said.

Lambert, 43, steered Norwich into the Premier League with two consecutive promotions and then consolidated their top-flight status with a 12th-place finish last season.

But his three-year reign at Norwich ended on a sour note, with the club rejecting Lambert's resignation and struggling to agree a compensation package with Villa.

Lambert and Norwich then started legal action against each other, with Lambert also upset with Carrow Road chairman Alan Bowkett claiming at a Fans Forum that the manager was seeking between £1.5m and £2m compensation.

A Premier League Managers' Arbitration Tribunal will decide on the case.

"Is it a source of sorrow it's ended up how it has? Yes, it should never have been the way it is," Lambert said.

"Would you hope it could get sorted amicably? You'd like to think that way."

A win for Lambert on Tuesday would give Villa their first domestic cup semi-final appearance since 2010, when they were eventually beaten in the League Cup final by Manchester United.