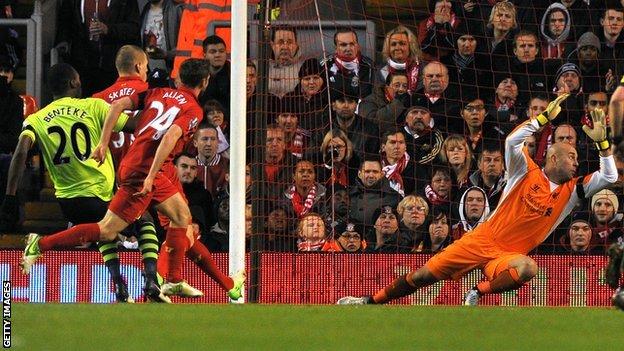 Aston Villa striker Christian Benteke has the potential to "be anything he wants", according to boss Paul Lambert.

The 22-year-old Belgium international was instrumental in Villa's 3-1 win at Liverpool on Saturday, scoring two and setting up Andreas Weimann for another.

"I don't want too much pressure on him but he has the potential to be one of the best," Lambert told BBC WM.

"The potential for someone as young as that is frightening. He can be anything he wants."

The three young lads at the back were magic for me. It all bodes well both for them and the future of this club

The Villa boss added: "Not many push him off the ball. Whether it's Gabby Agbonlahor or Andi Weimann, everybody loves playing beside him. And he's a top lad as well."

Benteke, signed from Genk on transfer deadline day in August for a fee of around £7m, has scored five Premier League goals in 14 appearances for Villa this season.

But Saturday's sublime backheel to set up Weimann for Villa's second goal was perhaps his most impressive contribution of the match.

"That was a world-class goal," added Lambert. "The whole move, the backheel and Andi's finish was fantastic.

"The goals were outstanding, worthy of winning any game, especially the second.

"Not bad for a team that doesn't score many. I've always said we've got goals in us."

Villa, along with Stoke City and QPR, are still the top flight's lowest scorers, with just 15 goals in 17 games.

But no team in the bottom half has conceded fewer. And Lambert had particular praise for his academy-schooled young back three of Chris Herd, Ciaran Clark and Nathan Baker, who produced a stunning early tackle on Jonjo Shelvey to prevent Liverpool taking the lead.

"The three young lads at the back were magic for me," added Lambert.

"They put their bodies on the line. It all bodes well both for them and the future of this club.

"You're not to going to come here and dominate a game right from the off, knowing the players Liverpool have got and the run they were on. You know you've got to defend really strongly and get a foothold in, which we did."