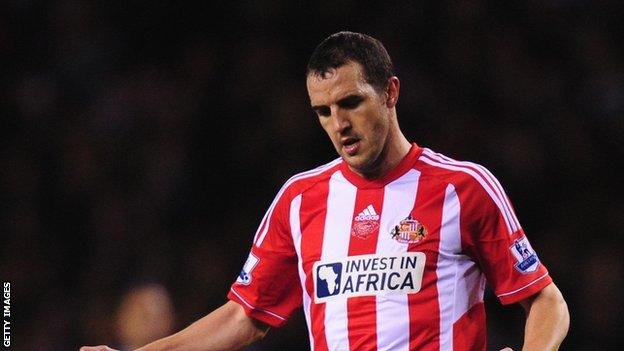 Sunderland must start against Reading with the same intensity with which they have been finishing their recent games, according to defender John O'Shea.

Tuesday's match between the clubs at the Stadium of Light has grown in importance now the Black Cats have dropped into the bottom three.

But O'Shea believes his side's second-half effort in Saturday's defeat against Chelsea showed the way forward.

"We must show that confidence from the start," he told BBC Radio Newcastle.

Sunderland fought hard after going three goals behind, pulling a goal back and putting the visitors under pressure.

At the end of the game they were applauded off, despite the defeat meaning Martin O'Neill's side fell into the relegation zone, just one place above Brian McDermott's Reading.

"The league doesn't end after the Reading game, fortunately, but we know it's a massive game," acknowledged O'Shea.

"We have to show the confidence and belief we've shown in some of our second half performances recently, in the way we've taken the games to the opposition. We can't just wait for a goal to be scored against us before we show a reaction.

"Heads could have really, really dropped [against Chelsea] but the attitude of the lads was good, and rightly so, because the supporters pay their money and the least we should be doing is working hard and showing a positive attitude to try and create goals.

"The fans appreciated that at the end, but we know and the manager knows we have a fantastic set of supporters and we need to give them something to get behind us. When we showed that they gave us fantastic support."

But O'Shea brushed aside suggestions Sunderland have been unlucky in recent games.

"It's definitely the case about making your own luck," he added.

"If you're doing the right things in training, the right things during the game, applying yourselves properly, in the right positions, breaking a gut to get into the box and to get back to make a tackle, those things fall for you."