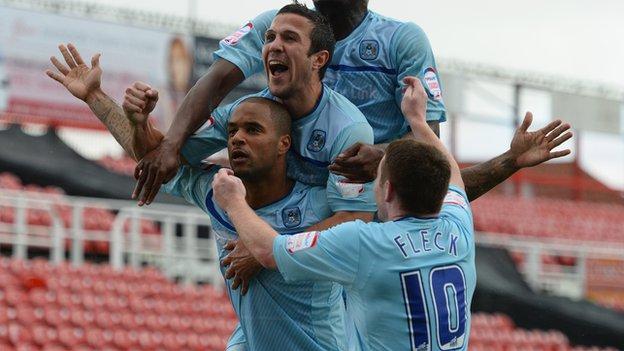 Saturday's 5-1 win over Walsall lifted Mark Robins' side to within nine points of the League One play-off zone.

But, after a run of just two defeats in 12, Coventry have just four games until on-loan 15-goal striker McGoldrick, 25, is due to return to Nottingham Forest.

The McGoldrush at the Ricoh

"Hopefully the club can do something to sort it out," Baker told BBC Sport.

"He can be the difference between getting us up around the play-offs and not."

Having been signed by then boss Andy Thorn on deadline day on 31 August, McGoldrick's loan is due to end on 1 January. But he is now out on his own as League Two top scorer after Saturday's latest brace against Walsall - and that sort of form for the Sky Blues has alerted other clubs.

"I spoke to David last week about what's going on and what he has in mind," Baker told BBC Coventry & Warwickshire.

"I was trying to point out the grass is not always greener.

"You see some players get good moves and go places and then they lose their form or they're not playing week in, week out."

McGoldrick has blossomed at the Ricoh this season, despite the Sky Blues' faltering start to the campaign following relegation from the Championship - and the handicap of playing under three managers, Thorn, caretaker boss Richard Shaw and now Mark Robins.

But there is a concern that any transfer market plans Robins has for January might be affected by the off-putting saga of the Sky Blues' current rent row with Ricoh owners ACL (there remains the threat of a winding-up order over reported arrears of £1.1 million).