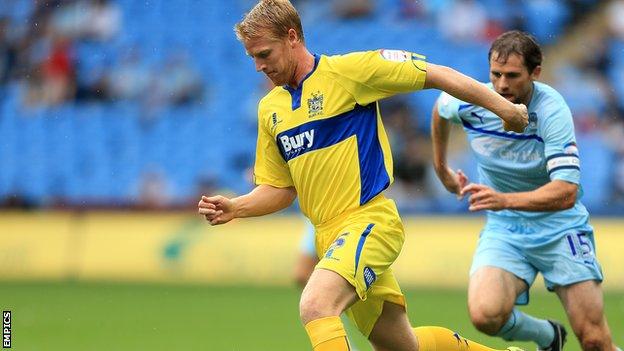 League One Bury have insisted they are not in serious financial trouble, despite being placed under a transfer embargo by the Football League.

The embargo was imposed after the club took out a short-term loan with the Professional Footballers' Association.

They are confident of paying it back in full and on time by mid-January.

"All businesses experience cash-flow problems and we're no different to anyone else," commercial director David Manchester told BBC Radio Manchester.

"December is traditionally not a brilliant month for attendances.

"Our attendance on Saturday [against Leyton Orient] was just over 2,100 and we've only got one more league game at home before January - on 21 December against Shrewsbury Town."

Bury will also play a Johnstone's Paint Trophy quarter-final tie against Preston at Gigg Lane on 18 December, a game that was postponed earlier this month because of a waterlogged pitch.

And there is also the possibility of a home tie in the third round of the FA Cup, provided they beat Southend in a second-round replay on Tuesday.

The transfer embargo prevented Ben Parker, who last week, from playing in

Manchester added: "Whilst this loan is in place, and until it is repaid, the club have been issued with an embargo on registering new players with the Football League, which we were well aware of when we took out the loan."

They will not be forced back to their parent clubs immediately and will be able to play for Bury until their loan deals expire.