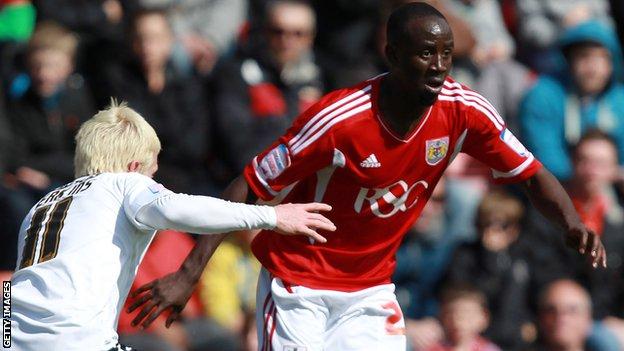 Adomah was given the chance to take the set-piece in the 88th minute, despite never scoring from a free-kick during his five years as a professional.

But the Ghana international, 24, curled the ball over keeper Chris Kirkland to earn his side a 3-2 victory.

"It was me and [Neil] Danns in the final," he told BBC Radio Bristol.

"I won it because [Steven] Davies wasn't involved [through injury]. That was delightful because I knew if Davies had been involved he would have bullied me off the free-kick.

"And, who knows, he could have hit the stand.

"I won the competition and had the confidence going in to the game. I knew if there was one coming up on the edge of the box then the assistant manager wanted me to take it."

Adomah's goal - his fifth of the season - earned City their second win in 16 games and lifted them out of the Championship drop zone on goal difference.

"It was so special to win it in the last minute," he added. "You could tell from the supporters that it meant a lot to them.

"It's what we needed. It feels so good to win a game and hopefully we can build on it."