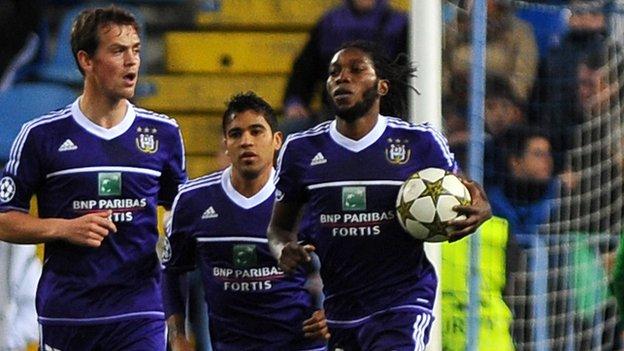 Dieudonne Mbokani scored a hat-trick for Anderlecht, who crushed Mons 5-0 to remain at the top of the table with a five-point lead. The Congo Democratic Republic striker becomes the third-highest goal scorer with 12 finishes.

The Gambia striker Ebrimah Sawaneh is second top scorer after giving Leuven the lead from the penalty spot in the 1-1 draw with Cercle Bruges. Sawaneh has 14 goals in his account.

Imoh Ezekiel fired home his ninth goal in the Pro League as his side Standard Liege hammered Charleroi 6-1. The Nigeria striker found the back of the net in the 65th minute with the final goal of the game to complete the rout.

Senegal striker Mbaye Leye scored what turned out to be the winner for Zulte-Waregem, who edged out Kortrijk 2-1. Leye scored from the penalty spot in the 87th minute to secure the points before Kortrijk pulled a goal back in added time.

In another massive scoreline Club Bruges embarrassed Beerschot 7-1 with Burundi striker Mohamed Tchite scoring the fourth goal for his side in the 58th minute.

Although Real Valladolid lost 3-2 to Real Madrid, it was a big moment though for Angola striker Manucho Goncalves, who scored both goals for his side. Manucho put Valladolid in the lead twice before Madrid came from behind on both occasions to win. Manucho has now taken his goal tally to six - his highest since moving to Europe five seasons ago.

Equally impressive was Nigeria striker Obafemi Martins, who gave Levante the lead as they blasted four goals passed Mallorca without reply. Martins, who scored on his debut for the Spanish side back in September, has increased his tally to six goals.

Nigeria striker Kalu Uche was on target for Kasimpasa after equalising in the 56th minute in the 2-2 draw with Genclerbirligi. Uche has scored nine goals for Kasimpasa so far and is tied with two other players as second-top scorer.

Armand Deumi and Lomana Lua Lua were both on target for Karabukspor, who defeated Gaziantepspor 2-0. Cameroon defender Armand was the first to put the visitors ahead in the 4th minute before Democratic Republic of Congo striker LuaLua added the second 12 minutes later.

Cameroon striker Pierre Webo equalised in the 19th minute for Istanbul BB but his side went on to lose 2-1 to giants Fenerbahce.

League holders Montpellier clinched three points after beating Ajaccio 3-0 at home but they are still floating in mid-table - a distant position from last season's performance. Morocco striker Younes Belhanda was among the scorers, finding the back of the net in the second-half after Nigeria's John Utaka had given Montpellier the lead in the 28th minute.

Morocco defender Ahmed Kantari was sent off in the 89th minute although his side Brest were able to hang on to earn a point by drawing 2-2 at Rennes.

Tunisia defender Yassin Mikari scored equalised for Sochaux in the 64th minute to help his side settle for a 1-1 home draw with Lille.

Olympique Marseille, meanwhile, failed to close the gap at the top of the table after losing by an astounding 3-0 defeat at home against Lorient. Burkina Faso midfielder Charles Kabore was sent off in the game and Marseille finished the last 52 minutes with 10 men.

Morocco striker Mounir El-Hamdaoui scored his third goal of the season after coming on as a substitute for Fiorentina who lost 4-2 at Roma.

Leocisio Sami from Guinea Bissau scored Maritimo's second goal to seal victory for his side in their 2-0 win over Nacional. And Equatorial Guinea striker Javier Balboa scored the winning goal for Beira Mar with three minutes remaining to beat Gil Vicente 2-1.

Algeria poacher Rafik Djebbour chose the perfect stage to extend his lead as the top scorer after scoring both goals for Olympiakos in the 2-2 draw with arch-rivals Panathinaikos in the country's biggest derby. Djebbour has increased his tally to 11 goals.

Nigeria striker Benjamin Onwuachi increased his tally to four goals after scoring a goal in each half for Xanthi, who beat Panionios 4-0.