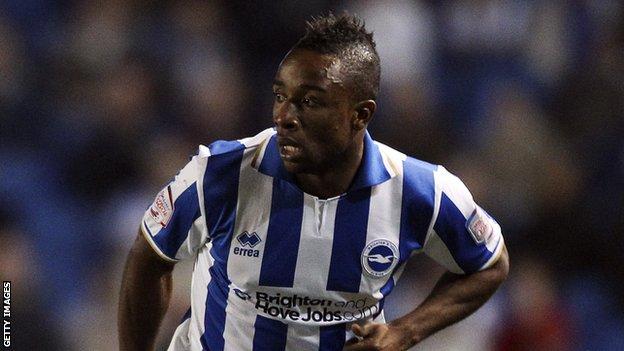 Brighton & Hove Albion winger Kazenga LuaLua says he will give his all to get back in the starting eleven.

The Congolese 22-year-old made his first appearance since October when he came off the bench to score in the 2-2 draw with Charlton on Saturday.

We believe in him and we know what we can bring. If he shows character and is positive he will have plenty of chances to play

"It has been a frustrating season for me. I need to train well because I want to get back in the team so, so bad.

"When I get the chance I will take it, for sure. I know what level I want to be (at)," he told BBC Sussex.

LuaLua has been used largely as a substitute so far this season, with seven of his nine appearances coming from the bench.

And having been out of the side for almost two months, he vowed to continue working to regain his best form.

"When you are out of the team and not even making the bench all you can do is train well and wait for the chance," he added.

"That's what I've been doing and I'll keep doing the same.

"I will get that level back and I'm not worried because I know I can do better and I will do better."

"We believe in him and we know what we can bring. He needs to do it all the time. It's up to him, he commented.

"If he shows that character and is positive, he will have plenty of chances to play."

LuaLua marked his goal against Charlton with a celebratory back-flip, which was also a trademark of his brother, the former Portsmouth and Newcastle striker Lomana LuaLua.

However, he is under orders not to repeat it.

"The doctor understands because it was my first goal of the season, so he let me off for that one,"LuaLua said.

"Last season when we played Millwall I scored and when I landed I had a problem with my ankle and the doctor said not to do it any more."