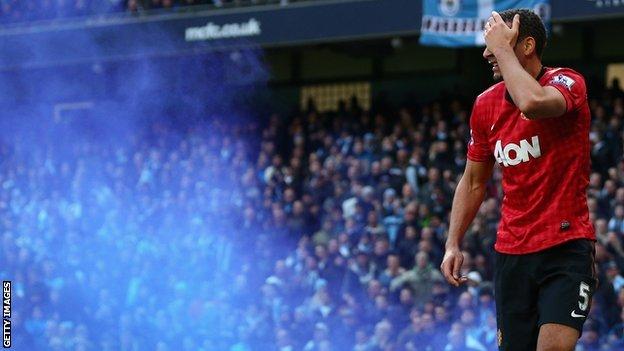 Professional Footballers' Association chief executive Gordon Taylor says it might be necessary to introduce netting around pitches to protect players.

Taylor was speaking after Manchester United's Rio Ferdinand was hit by an object as his side celebrated a winner against Manchester City on Sunday.

"I think you've got to consider, as has been suggested, some netting in vulnerable areas," said Taylor.

Netting is not something we feel is necessary

"It could be behind the goals and round the corner flags."

Centre-back Ferdinand suffered a cut above his left eye after being struck as United celebrated striker Robin van Persie's winning goal in a 3-2 victory against their rivals.

While Ferdinand played down the incident in a tweet, the Football Association has opened an investigation into the incident, which has been condemned by Manchester City.

City keeper Joe Hart also had to stop a fan who had run on to the pitch from reaching Ferdinand as the defender recovered from the blow.

In a similar incident in October, Sheffield Wednesday goalkeeper Chris Kirkland was attacked by a fan who ran on to the pitch during his side's match against Leeds United at Hillsborough.

Kirkland, 31, required treatment after he was struck in the face during the Yorkshire derby, which ended in a 1-1 draw.

Fletcher worked on the design of Wembley Stadium, as well as stadiums at Bolton, Coventry and Huddersfield and was formerly chief executive of Burnley.

He said: "To stop a £1 coin going onto the pitch is going to take some fine mesh netting and I have never seen that.

"In foreign stadiums they do have netting, but that is to stop bigger objects like flares. I have certainly never looked at finding something to stop coins when designing stadia.

"I have never seen a mesh you can see through without feeling it affects your view of the game."

Stadiums in Europe have fences and moats to stop supporters getting on to the pitch.

"I don't think we should allow the actions of a few people ruin it for everyone else," Fletcher added. "We have CCTV extensively in grounds now and we need loyal supporters to report these people."

There is no law against fences at grounds, although the Taylor Report - commissioned after the Hillsborough tragedy in 1989 - issued guidelines if they were installed.

Ruth Shaw, chief executive of the Sports Ground Safety Authority, said: "There were recommendations in the Taylor Report about fences but no legislation was passed."

The chairman of the Football Supporters' Federation, Malcolm Clarke, believes introducing netting would not be the right solution.

"Netting is not something we feel is necessary to have," he said.

"No-one condones the throwing of missiles, but arrests last season were 24% down on previous seasons.

"It is undoubtedly improving. Before we start making knee-jerk reactions to particular incidents we ought to bear that in mind."