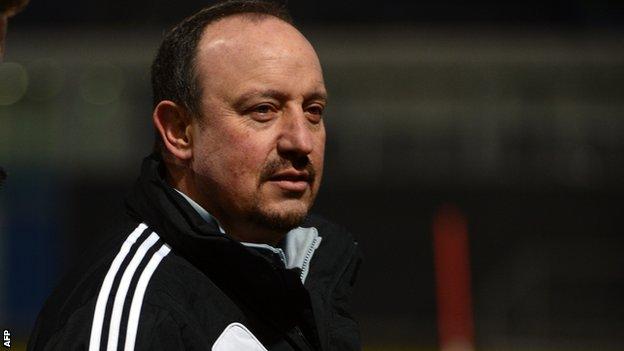 Chelsea manager Rafael Benitez insists the Club World Cup is a massive competition for his side.

The Blues will represent Uefa as Champions League winners in Japan, starting with their semi-final against Mexican club Monterrey on Thursday.

"It's a massive competition," said Benitez, who won the tournament with Inter Milan in 2010.

Club World Cup on the BBC

"I think everyone here in this club has the same idea as me, to win every trophy that you can."

The 52-year-old has suffered a mixed start to his time at Stamford Bridge, being jeered on his home debut by supporters before failing to win his first three games in charge.

But two victories in a week - a 6-1 thrashing of Nordsjaelland in the Champions League and a 3-1 victory over Sunderland - have put his side in good form ahead of this year's Club World Cup.

Benitez says he is not feeling pressure ahead of the tournament, which will give him an opportunity to win his first trophy as Chelsea manager.

"I don't have much problems in terms of pressure," said Benitez. "I have so much experience, and I would like to enjoy every minute here - to do my best and try to win."

The Club World Cup is contested between the winners of Fifa's six confederations plus a host nation team.

In the other semi-final, African champions Al-Ahly, from Egypt, will face Brazilian side Corinthians.

Benitez has a mixed record in the competition, which was first played as an eight-team one-off tournament in 2000 before becoming an annual six-team competition from 2005 onwards.

He lost to Sao Paulo with Liverpool in 2005 - missing his father's funeral to attend the final - before winning the title with Inter Milan in 2010.

Chelsea are aiming to become the second English team to win the competition after Manchester United's success in 2008.