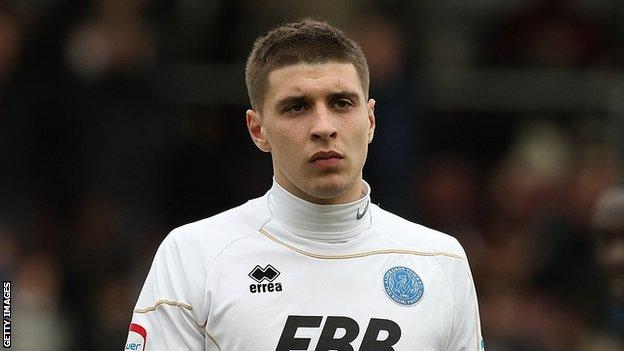 Aldershot Town winger Adam Mekki hopes to improve his goal return after netting his first of the season.

The 20-year-old came off the bench to score the equaliser in the Shots' 1-1 League Two draw at Oxford United on Saturday.

He told BBC Surrey: "It would be nice to score more often. It's one part of my game I'm disappointed in.

"I've played over 50 games now and only scored two goals. It's something I'll be looking to work on."

Mekki, who started 10 of Aldershot's first 11 games of the season, has endured a frustrating time of late.

His last start came in the 0-0 draw at Dagenham in October, where he sustained a hamstring injury which kept him out for almost a month.

"I picked up an injury and was out for a while," he added.

"The lads were doing alright so it was hard to get back in the team.

"There is healthy competition for places so I was never expecting to walk straight back in the team.

"I knew I'd have to work hard and the lads are doing a good job of keeping me out of the team."

Goal difference is currently keeping Shots outside of the League Two relegation zone but Mekki is confident they will be able to move up the table in the new year.

The Hampshire side have only lost two of their last eight league games following their point at Oxford.

"I think we played well. To come to Oxford and get a point - you'd take that any day," he said.

"There are still certain parts of our game we need to improve on, all over the pitch.

"We look around the dressing room and we've got a lot of quality.

"After Christmas we have always done well. If we carry on the way we have been playing the performances will hopefully lead to points."