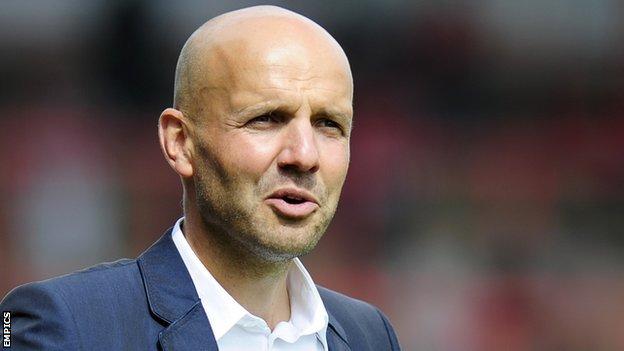 The Grecians raced into a three-goal half-time lead but had to withstand a late rally from their hosts.

"It was a frantic finish and at three up, whatever people say, it's hard to play with freedom," Tisdale told BBC Radio Devon.

"I'm just glad we got a third goal as it was always going to be a different second half,"

John O'Flynn struck twice after Pat Baldwin's opening goal, which was only the third of his career.

"Pat is lethal from a yard out," Tisdale joked.

"Whoever you are, if you run in on goal enough the ball will come to you.

"I've been here four times as Exeter manager and all the games have been terrific."

Terry Gornell scored both Rochdale goals and his header near the final whistle set up a tense finale.

"No matter who you are, they get the first goal and the psychology changes and of course they got that late goal which gave us a nervy few minutes at the end," said Tisdale.

Exeter have now won seven away games this season and move into the play-off places ahead of next week's derby with Plymouth.

"I don't think form or our league position will make any difference on the game," added the Exeter boss.

"I make no secret that I want to have better home form but not at the expense of our away form."