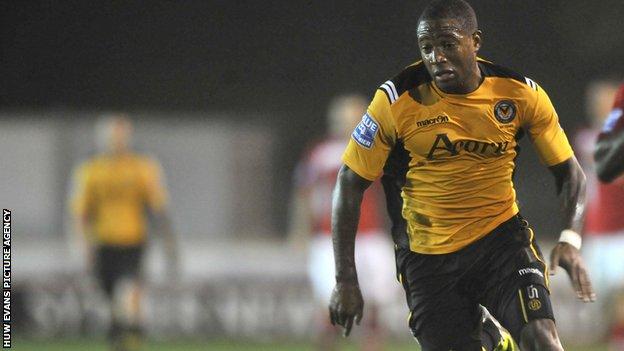 County have a game in hand over leaders of Blue Square Bet Premier Grimsby Town and are only a point behind them.

The Welsh side face Luton at Rodney Parade on Tuesday evening.

"Six points is a big gap at this stage of the season, especially at the top, so it would be a big statement," said O'Connor.

"It's a game in hand and we can send a message to Grimsby and a few others around us and it would give us some breathing space."

County surrendered their place at the top of the league with their 3-2 defeat to Kidderminster Harriers on Saturday.

Newport slipped to third in the table after an impressive start to their campaign which has seen them set the pace in the Blue Square Bet Premier.

O'Connor signed for County in July and hasn't looked back, scoring six goals in their first five matches of this campaign.

He was Conference Player of the Month for August 2012 after he was reunited with his former Rushden & Diamonds manager Justin Edinburgh at Newport County.

"I am not surprised we are doing well," said O'Connor.

"I didn't doubt we would do well, but to start as well as we have for the first half of the season has surprised ourselves.

"People are disappointed that we have given that up and that we are in third place, or whatever.

"I think that is testament to how far we have come."

O'Connor signed for County after a 12-month stint at Luton, where he made 37 appearances, scoring seven goals.

He joined the Hatters on a free transfer in the summer of 2011 following his departure from Rushden & Diamonds.

Luton agreed to cancel his contract in July, allowing him to seek other opportunities.

O'Connor dismisses the idea that a game with his former club adds any extra spice to the contest.

"There will be a bit more banter than usual because a few of them are my mates.

"I will be taking it seriously and I want to win the game and get some breathing space between us and them."