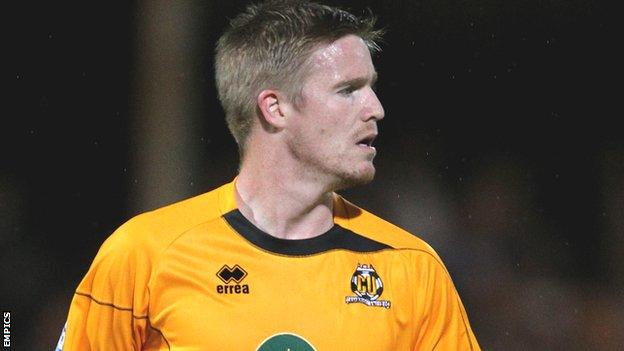 Josh Law's 25-yard free-kick - his first goal of the season - put the hosts ahead in the first half.

Theo Streete was shown a second yellow card and was sent off for a foul on Harrison Dunk and Gash kept his cool from the spot in stoppage time.

"I am very disappointed. They have made all their subs, they have chucked all their options at it and we have got the game.

"We make a poor decision when Nathan Arnold is through. He has only got to roll it in to Dan Bradley into an empty net and it is 2-0 and game over.

"We haven't got the killer instinct, that's all we needed to see it through. We needed someone to take charge of the situation.

"We didn't go and play on the front foot in the second half. The ball was coming back far, far too easy and we were back to where we were a bit ago.

"In the second half we are 1-0 up and suffer a bit of panic where we make the wrong decisions. At times like that, you need a little bit of composure and you just do your job. Too many of them have not done that tonight and it has cost us in the end."

"I think a point is the least we deserve if I'm honest. I thought we deserved to win by some margin.

"We were wasteful in front of goal, but it was a good team performance and I think everyone here tonight can see there is a good team emerging.

"We looked solid, we looked stable, we didn't look in too much trouble and we are playing some good football at times."