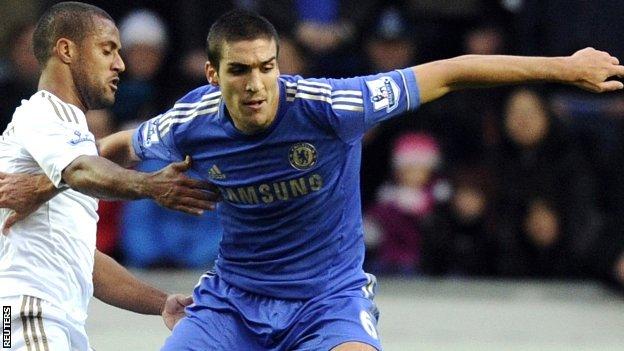 Chelsea midfielder Oriol Romeu is expected to be out of action for six months after knee surgery.

The 21-year-old's anterior cruciate was reconstructed and his medial meniscus was repaired in an operation on Monday.

Spaniard Romeu was injured during and returned to London rather than flying to Japan for the Club World Cup.

He has played 33 times for Chelsea

With the visit to Wearside marking the start of and Chelsea manager Rafael Benitez will be forced to change his midfield.

Brazilian playmaker Oscar was introduced against Sunderland when Romeu limped off after 20 minutes at the Stadium of Light, but is not a direct replacement for the anchorman.

Chelsea had initially hoped Romeu may be able to join up with the Blues squad in Yokohama ahead of their first match in the Club World Cup against Mexican side Monterrey on Thursday, but further assessment revealed the need for surgery.

The Stamford Bridge club face a busy fixture list, with eight games in less than a month before the middle of January.