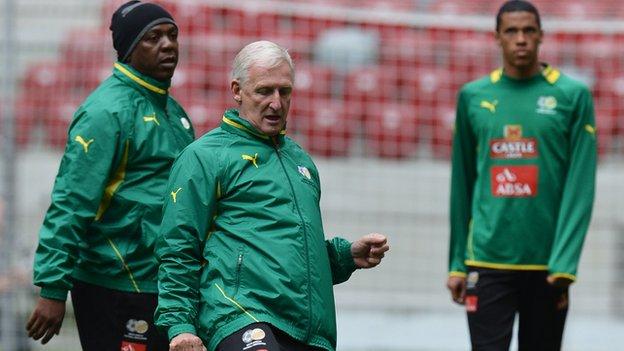 Ayanda Patosi has been called up by South Africa for the first time, with the midfielder included in the squad to face Malawi in a friendly in Durban.

The 20-year-old, who plays for Lokeren in Belgium, is among 24 names selected by coach Gordon Igesund, who has also handed a recall to Tsepo Masilela following the defender's recovery from a long-term injury.

Igesund has kept the core of the team that lost 1-0 to Zambia at FNB Stadium in the Nelson Mandela Challenge last month.

In addition, Russia-based defender Siyanda Xulu and the Orlando Pirates duo of goalkeeper Senzo Meyiwa and forward Daine Klate make their returns after long lay-offs because of injury.

"I have been using the past five matches to look at various players and this one against Malawi is no different. The only difference is that this is the last chance for me and my technical team to have a final look at what we have at our disposal," said Igesund.

"Time for observing and assessing the players is almost over, and I believe this match will give us an indication of where we are and where we are going," added Igesund.

Igesund has also announced a further 12 players that will go into a mini-training camp in Johannesburg from 27 - 30 December ahead of the 2013 Africa Cup of Nations, which South Africa are hosting.

The final 23-man Nations Cup squad will be announced after this camp on Sunday, 30 December.

"We initially intended to name the final squad after the match against Norway on the 9 January next year, " said Igesund.

"But after careful consideration, we have decided to name the squad at the end of our upcoming December camp so that when we start the January camp we have all the players we are going to use in the tournament."

"That will enable them to play together the last two preparation matches against Norway and Algeria."

Malawi coach Kinnah Phiri has recalled Frank and Davie Banda to his squad a month after they were expelled for indiscipline.

The two midfielders were sent home just before Malawi left for the Cecafa (east and central regional) tournament in Uganda for breaking camp rules as they sneaked out for an all-night drinking spree in Blantyre.

Phiri has also recalled local scoring sensations Gabadin Mhango who missed the trip to Uganda because he was preparing for high school examinations.

However the surprise exclusion is Robin Ngalande, who plays for South African top flight league side Wits University but has been relegated to the bench recently despite having arrived at the club early this year from Spanish side Atletico Madrid Reserve.

"Davie and Frank have made a public apology and I as a father and coach felt such a gesture means they have learnt a lesson so I have included them in the squad knowing when we go to South Africa," said Phiri.

"We normally fail to play on Fifa calendar days due to lack of finances so this is an opportunity for us to start fine-tuning the team. I have the confidence we will do well because South Africa are footing all our bills and that has allowed us to even have foreign-based players."

Malawi will depart on 17 December and camp in South Africa for five days before the friendly match.