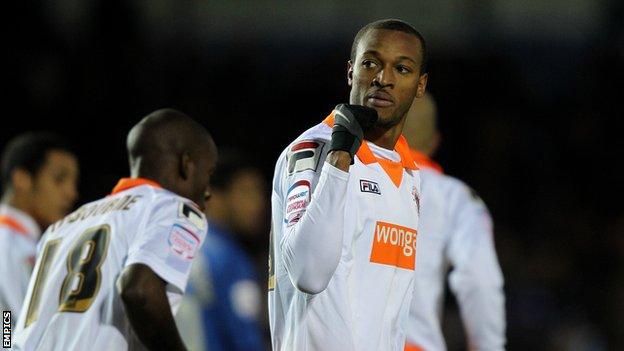 Michael Appleton is hoping striker Wes Thomas will remain with Blackpool after an impressive start to his loan spell.

Thomas, 25, and has made four appearances, scoring once.

"He's got the talent and he just wants an opportunity," Appleton, who earlier this season, told BBC Radio Lancashire.

"We've got him until January and I'm sure he'll be desperate to stay, so we'll try and do something about it."

He added: "I think there were a few eyebrows raised when we brought him in.

"I think I got a bit of stick off certain fans, who were saying 'we're bringing in a reserve team player from Bournemouth - what's this all about?' But he's a player I believe in."

Thomas is the only addition that Appleton has made to his squad since replacing Ian Holloway as manager at Bloomfield Road.

The 37-year-old remains unbeaten, although five of his six matches at the helm have ended in draws.

"It's a difficult division to be in," Appleton continued. "It's 46 games long and you've just got to keep racking up the points.

"If we were hanging on in games and looking like we didn't have a chance, I'd be worried.

"We went to a side in the top two, played ever so well and probably should have won the game."