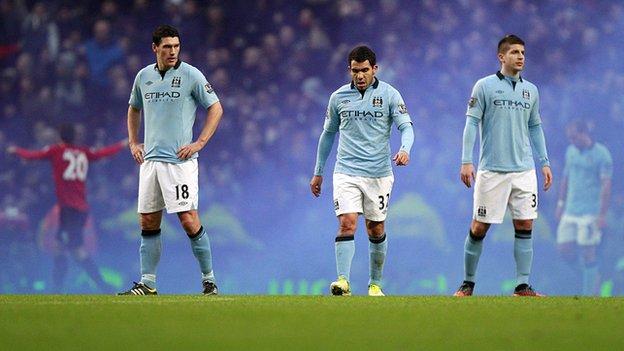 Manchester City midfielder Gareth Barry has been banned for one match and fined £8000 after admitting a misconduct charge by the Football Association.

It means the England international will miss Saturday's Premier League match against Newcastle.

The charge relates to an incident which occurred after City were

The FA took action for "breach of Rule E3 in that he used abusive and/or insulting words towards an official".

A City statement read: "Both the club and Gareth Barry reluctantly accept the punishment which leads to Gareth being unavailable to take part in the weekend's match against Newcastle."

The 31-year-old will be available for selection again for the home game against Reading on 22 December.

A deflected injury-time free-kick from United striker Robin van Persie won the game for his side but the aftermath has been overshadowed by the actions of fans.

United defender Rio Ferdinand was left bleeding from a cut above his eye after being hit by an object thrown by a supporter as he celebrated the winning goal.

City keeper Joe Hart also had to restrain a fan who ran on to the pitch trying to get to Ferdinand.