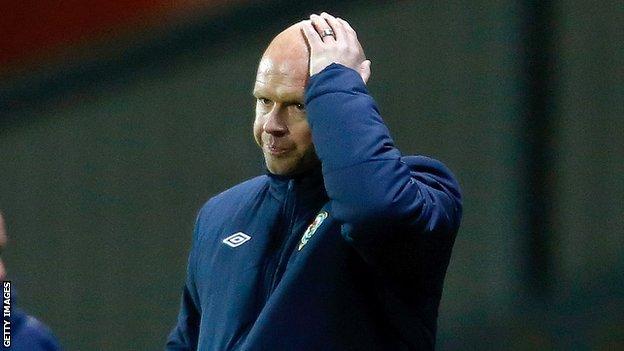 The 43-year-old former Rovers defender but the club have won just one of their 10 matches since his appointment.

The Norwegian's final game was a on Boxing Day, Blackburn's fifth loss in six outings.

Rovers are already talking to potential replacements and hope to make an announcement shortly.

"It goes without saying that I am bitterly disappointed to have been relieved of my managerial duties at Ewood Park after just 57 days since my appointment," said Berg in a statement released by the League Managers Association.

"At this stage I would just like to release a short statement thanking the Blackburn Rovers fans for their incredible support during my time in charge.

"I have always enjoyed a fantastic relationship with them dating back to my playing days where we shared some great memories. It was an honour for me to manage a club that is so close to my heart and I now wish all of them every success for the rest of the season and beyond.

"I would also like to thank the players and staff for their support and commitment in this short period. They have all done their best and unfortunately the results in these 10 games have not reflected their performances.

"I wish the club all the best in the future, and am sure, with a few additions in the January transfer window, they will have a good chance of getting a play-off place."

Berg, who won the Premier League title as a player with Blackburn in 1995, had signed a three-year deal to become their new boss.

had followed months of protests from supporters aimed at the Scot and owners Venky's.

Despite the off-field turmoil, Rovers had started well in the second tier after suffering relegation from the Premier League in May - they were top of the table prior to Kean's final game in charge.

But Blackburn have struggled for points since Berg's arrival and have dropped into the bottom eight as a result of their poor form.

He failed to win a home match in his short stint at the helm, with a their only success during Berg's reign.

Former Blackburn striker Kevin Gallacher feels the board realised they made a mistake in appointing the Norwegian, whose only previous managerial experience was in his home country with Lyn Oslo and Lillestrom.

"When a new manager comes in you expect to see a lift from the players, but they never got that," he told BBC Radio 5 live.

"I think the Blackburn board have looked at it, put their hands up and said that they got it wrong, and that is why they have acted so quickly."

Gallacher, who played with Berg in the 1995 Premier League title winning side, thinks former managers Mark Hughes and Kenny Dalglish will be among the favourites to take over.

"Maybe Mark Hughes has some unfinished business, and people have said to me: 'What about Kenny coming back and doing something?'

"There will be new names and different names but some of the older names may creep back in again," he said.

A statement on Blackburn's official website said: "This decision has been taken following a very disappointing sequence of results.

"The club thanks the four men for their efforts and wishes them every success for the future."

Blackburn travel to Barnsley on Saturday.