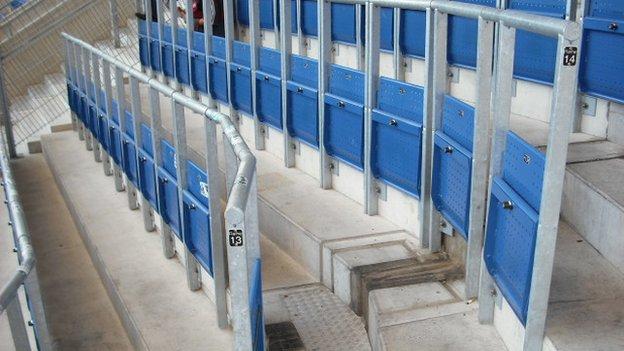 On Tuesday, the Football Supporters' Federation is hoping to win the backing of MPs for its plans for a small-scale trial at Premier League clubs.

It believes the pilot scheme would show standing - outlawed after the Hillsborough disaster in 1989 - is now a safe way to watch football.

The Premier League have released a statement opposing the idea.

FSF's Peter Daykin said: "We need to find out if it can work and the only way to do that is to trial it."

But a Premier League statement says they will "not be encouraging the Government to change the law".

It reads: "Since the introduction of all-seater stadia the supporter experience has improved significantly and we have seen more diverse crowds attending Premier League matches, including more women and children.

"The police, safety officers and licensing authorities remain clear and have consistently informed us that crowd management has improved as a result of all-seater stadiums being in place in the top two divisions in this country."

All-seater stadiums have been compulsory in the Premier League since 1994, following Lord Justice Taylor's report after the Hillsborough disaster.

But MP Roger Godsiff has tabled an Early Day Motion calling for government approval of a pilot scheme.

The FSF says the idea has the support of Aston Villa and the Scottish Premier League plus 12 Football League clubs, including Cardiff City, Crystal Palace, Derby County and Hull City.

The proposal is to introduce a design of "rail seat" currently used in some European countries such as Germany. This incorporates a safety barrier and a flip-down seat on every other row. The seats can be locked in an upright position, meaning two rows of supporters can stand in between the barriers, which reduces the danger of a crush.

This type of standing area would also be able to be converted to seating for European competitions, where all-seater stadiums are required.

FSF's safe standing co-ordinator Daykin told BBC Sport: "The debate about standing has reached a point where both sides are entrenched.

"Things have changed dramatically since 23 years ago when the Taylor Report was produced.

"They have moved on massively in terms of technology and know-how around safety in football grounds.

"What we are calling for is a number of small-scale trials at Premier League clubs up and down the country.

"Then experts, safety officers and the police can see how it works in a modern context.

"We have had 50 MPs sign up to Roger Godsiff's EDM and correspondence showing support from more MPs unable to sign."

The campaign for the introduction of safe-standing areas has already met with some opposition from the chair of the Hillsborough Family Support Group.

"There are 96 reasons why it should not be allowed," said Margaret Aspinall, whose son died at Hillsborough.

"Standing should never, ever come back. I do not think there is anything safe about standing.

"I feel insulted that people are trying to fight for justice for Hillsborough while this campaign is growing."

Professional Footballers' Association chief executive Gordon Taylor said on Monday that clubs might have to introduce netting around pitches to protect players.

Taylor was speaking after Manchester United's Rio Ferdinand was hit by an object as his side celebrated the winning goal against Manchester City on Sunday.