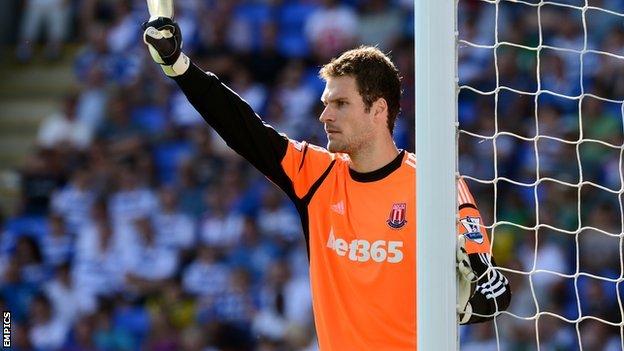 Stoke City keeper Asmir Begovic says that being able to boast the meanest defence in the Premier League is simply down to being "organised".

The Potters have scored just 14 goals this season, the third-lowest total in the top-flight.

But they have only conceded 12 goals, with only two going into their net at the Britannia Stadium.

One a game, or more:

"Ryan Shawcross has been immense for us all season and so has Robert Huth.

"Look at the way we kept Christian Benteke to a minimum against Aston Villa on Saturday. That's what they do. That's the standard they've set.

"Although not at our best, we stuck at it again. We kept together and managed to keep a clean sheet and earn a point which is always good away from home.

"Villa are no mugs. They're a good, young, energetic team. And you can't take any away point for granted."

Stoke's 0-0 draw on Saturday, was hardly a surprise given that Villa are the Premier League's lowest scorers, with 12 - two less than Stoke.

But it stretched the Potters' unbeaten run to six games ahead of Saturday's meeting with fourth-placed Everton at the Britannia.

"We've kept our run going," said Begovic. "Now maybe we can kick on at home next week. But Everton are one of toughest games of the season and we'll have to be at our best to beat them."

Stoke will have to change their back four for the first time in five matches, following the sending off of Ryan Shotton, who was dismissed in injury-time for a second booking.

"I'm not sure if it was deserved," said Begovic. "It looked harsh.

"He will be missed. He's done very well since he came in. But we have a very good squad and whoever comes in will do a good job."