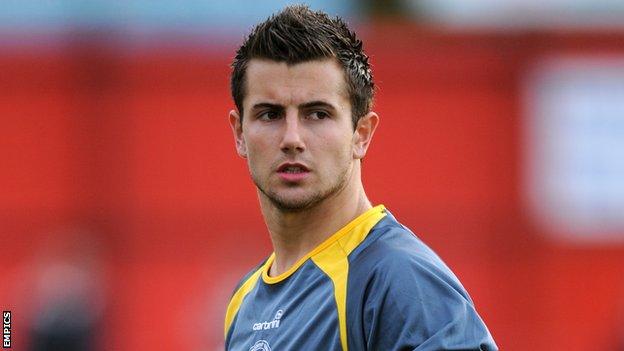 Aldershot Town manager Dean Holdsworth hopes to send goalkeeper Ross Worner out on loan as he continues his return from a back injury.

The 23-year-old has been sidelined for the past 10 months.

"Ross will probably go out on loan in the near future to get some games, if I can find him the right club.

"He's itching to play. He's training really well, so I have the luxury of having three goalkeepers," Holdsworth told BBC Surrey.

The former Woking and Charlton stopper made his first appearance of the season in a Hampshire Senior Cup tie last week.

Ross is going to take time and I am not going to rush him back. I like him and think he is an outstanding prospect

Football League and Blue Square Bet Premier clubs cannot sign players on loan until the January transfer window opens but can be given special dispensation to bring in goalkeepers.

However, Worner would be free to join a club further down the non-league pyramid without them having to seek permission.

With Jamie Young established as Holdsworth's number one this season and former Southend man Glenn Morris providing back-up, Holdsworth says there is no pressure to re-introduce Worner to first-team action.

"He's done brilliantly well to get back and be so professional.

"I'm delighted for him to be playing but there is no rush for him. Jamie Young has been outstanding and Glenn Morris has been here and been dedicated to us and professional," said Holdsworth

Worner signed a new contract earlier this year until the summer of 2014 and Holdsworth has re-iterated he sees the keeper remaining at the EBB Stadium in the long term.

"Ross's future is here," Holdsworth said. "We've been loyal with him and he will give it back to us at some point.

"I like him and think he is an outstanding prospect. He has been unlucky with the injury, but I respect him as a keeper."