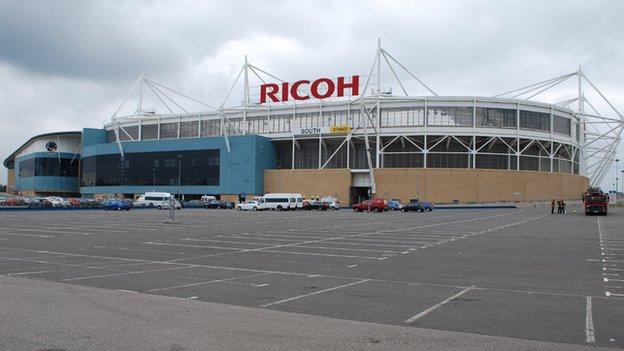 Coventry City are prepared to consider finding a new home in a bid to resolve their rent row over the Ricoh Arena.

Arena Coventry Limited (ACL) claim that the Sky Blues owe £1.1m in rent arrears and have given them until Boxing Day to pay up - or face a winding-up petition.

The Sky Blues, who claim the rent is too high, are still keen to negotiate - but also have contingency plans.

"The very idea of Coventry City playing home matches at Nene Park - or anywhere else - borders on the incredulous. But that appears to be where we are in the spat/row/slanging match between the club and ACL.

"The situation comes with things on the pitch going well - a genuine positive feeling for the first time in many years.

"An agreement has to be reached and, for what's it's worth, I think it will."

"The club has commenced the sensible process of making contact with other clubs," said a club statement.

"To evaluate if their stadiums meet our requirements should negotiations with ACL fail to reach a mutually agreed position on the rent, with the result that CCFC is forced to move away from the Ricoh to a new venue.

"Following the issuing of a statutory demand by ACL last week the board of directors of CCFC will, first and foremost, continue to work hard at bringing about a resolution regarding the rent dispute with ACL that will enable the football club to remain at the Ricoh Arena.

"However, in the interim period, they must consider other alternative and appropriate venues which are affordable for a football club to ensure CCFC fulfil their future fixtures."

One report has suggested that Coventry, who averaged 15,000 gates in the Championship last season and are still bringing in almost 10,500 on average in League One, might even consider a 90-mile round trip for home games at the 6,500-capacity Nene Park, home of the now disbanded Rushden & Diamonds and latterly Kettering Town.

The heart of Coventry's dispute over their rent is that, at £1.28m a year, they believe it to be the highest outside the Premier League and that it should be renegotiated.

Coventry claim that, on average, other clubs pay less than £170,000 a year and, unlike the Sky Blues, make revenue from matchday parking, as well as food and drink sales.

The club were taken to the High Court in August in Birmingham after they stopped payments of £100,000 a month in rent to ACL in April - but they were told to top up a deposit fund to cover ACL's unpaid invoices.